An Update from Author Vince Vawter 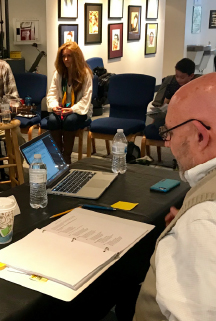 The Asheville (NC) Community Theatre hosted a "table reading" on two days in March of PAPERBOY, A NEW MUSICAL, based on Vince Vawter’s novel of a boy growing up with a stutter in 1950s Memphis. Jim Wann, a composer and lyricist, performed 26 original songs he has written for the musical while a troupe of 10 actors read the dialogue.

Wann is best known for creating and starring in PUMP BOYS AND DINETTES, a Broadway musical nominated for a Tony Award. Vawter and Wann, who are looking to get the musical produced, sought input from a group of directors and writers who attended the reading.

The sequel to the Newbery Honor-winning novel Paperboy, Vince Vawter's Copyboy is a Fall 2018 Junior Library Guild selection and more recently the Children’s Book Committee at Bank Street College's selection for one of the Best Children’s Books of the Year in the "Coming of Age" category.

Victor Vollmer isn’t a paperboy anymore.  He’s a copyboy now, but his duties at the newspaper get interrupted by a last request from Mr. Spiro, the old man who became Victor’s mentor and helped him take on his stutter in the beloved novel Paperboy, a Newbery Honor Book.  Victor takes off on a journey that sends him hundreds of miles from home ― toward the teeth of a gathering storm.  Confronted by an unfamiliar and threatening world, he meets a girl who is strong, smart, and bold like no one he’s known before, and together they venture to the place where river meets sea. When they wind up racing to evade a hurricane, Victor finds out what the fates have in store for him.

From the Summer 2019 Magazine