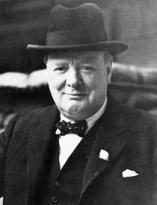 "One need not consult numerous historians or contemporary or family records to verify this: a well-circulated medical education film on stuttering that we use in our clinical teaching each semester shows excerpts from Churchill's famous "Iron Curtain" speech that clearly evidence classic stuttering behaviors," said Nan Bernstein Ratner, Ed.D, and Vivian Sisskin, M.A., of the Department of Hearing and Speech Sciences at the University of Maryland. "That Churchill was not seen to stutter in some records is in fact a classic and frustrating feature of stuttering."

"Perhaps Dr. Mather believes that Churchill never stuttered because he heard him give so many speeches fluently. But remember that many people who stutter, such as James Earl Jones, John Stossel, and Bruce Willis, are often fluent when they speak before an audience. But all three have overcome significant stuttering problems," said Barry Guitar, Ph.D., professor of Communication Sciences at the University of Vermont.

Guitar is a world-renowned expert on the topic whose text-book is currently being used in more than half of all college classes on stuttering. In the training videotape featuring Churchill, "The Doctor is In," produced by Dartmouth-Hitchcock Medical Center, Guitar, himself a stutterer, notes several instances of Churchill's stuttering and, specifically, his use of "a classic maneuver that those who stutter often use."

"We stand on very firm ground concerning Churchill and his stammer," says Jane Fraser, president of The Stuttering Foundation. "There was no doubt among his contemporaries that he stuttered. The diary of Lord Moran, Churchill's personal physician, who presumably knew him better than John Mather, describes Churchill's early stammer. Churchill's son, Sir Randolph Churchill, discusses it in his biography as does William Manchester in his outstanding 1983 biography, The Last Lion, describing Churchill as "speaking with a lisp and a slight stutter".

The Foundation's public service advertisements featuring Churchill have been called "a misrepresentation" by Mather, who says he believes Churchill had only a slight lisp.

"Stuttering can manifest in many forms," explained Lisa Scott Trautman, Ph.D., of The Florida State University. "It is also important to note that current research indicates that 30 percent of those who stutter have a concomitant articulation disorder, such as a lisp."

"We now know that stuttering is a neurologically-based condition that does not emerge from or reflect psychological maladjustment," added Dr. Ratner.

Concluded Dr. Guitar, " Although evidence clearly shows that Churchill stuttered, the important point here is that he overcame the problem to become a stirring and eloquent speaker. He gave us some of the most memorable words in history. The fact that he sometimes stuttered when he said them was—and is—nothing to be ashamed of."