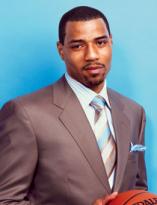 Martin is featured alongside other sports legends who stutter, such as Bill Walton, Ken Venturi and Bob Love. He is the 16th famous person added to the poster. Others featured include actor James Earl Jones, Marilyn Monroe and Winston Churchill.

Martin, who has struggled with stuttering since he was a child in school, says the speech disorder was a catalyst that propelled him to the highest levels of basketball. He was named National Player of the Year in his senior year playing for the University of Cincinnati Bearcats.

As a 6-foot, 9-inch power forward with the Denver Nuggets, he averages just over 15 points per game.

In a recent interview, Martin said stuttering has haunted him since his childhood in South Dallas. He endured teasing from classmates and refused to speak in class.

Later, as a basketball star in Cincinnati, his fear of being teased was replaced by the fear of speaking to reporters; and he tried his best to avoid interviews.

Then, when he was named Player of the Year and became the No. 1 college player in the NBA draft in 2000, Martin resolved not to let stuttering get in the way of his success. He confronts his stuttering head-on and he doesn’t worry what others think.

“Kenyon Martin will be a great source of inspiration to young people who struggle with stuttering,” says Jane Fraser, president of The Stuttering Foundation. She notes that speech therapists, school clinicians, teachers and others often hang the posters in a prominent place in their office.