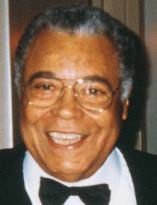 Raised in Mississippi and later Michigan, Jones was nearly mute for almost eight years of his childhood. “As a small child, I would communicate to my family, or at least those who didn't mind being embarrassed by my stutter or my being embarrassed,” Jones recalled in an interview with The Daily Mail. “I did communicate with the animals quite freely, but then that's calling the hogs, the cows, the chickens. They don't care how you sound, they just want to hear your voice.”

Other kids, however, were not as accepting as animals. “Stuttering is painful,” Jones said of his childhood struggle.  “In Sunday school, I'd try to read my lessons and the children behind me were falling on the floor with laughter… by the time I got to school, my stuttering was so bad that I gave up trying to speak properly.”

In the same interview, Jones recounts how a high school teacher’s skepticism helped him regain his voice. “I had started writing poetry in high school and he said of one of them, ‘Jim, this is a good poem. In fact, it is so good I don't think you wrote it. I think you plagiarized it. If you want to prove you wrote it, you must stand in front of the class and recite it by memory.’ Which I did. As they were my own words, I got through it.”

Jones said his teacher got him talking and reading poetry, which sparked an interest in acting. By the time he studied at the University of Michigan School of Music, Theatre, and Dance, he learned to control his stutter but he maintains that it never fully goes away. In an interview with NPR, Jones said of his stuttering, “I don't say I was 'cured.’ I just work with it.”

Jones went on to a career that spans six decades and includes memorable roles on stage and screen. He received the 2008 Screen Actors Guild Life Achievement Award for his "long and quiet devotion to advancing literacy, the arts and humanities on a national and local scale," said SAG President Alan Rosenberg. In addition, he has won three Emmy Awards, two Tony Awards, and an honorary Academy Award. As his program bio for his appearance in Tennessee Williams’s Cat on a Hot Tin Roof read, James Earl Jones “transformed his weakness into his greatest strength.”