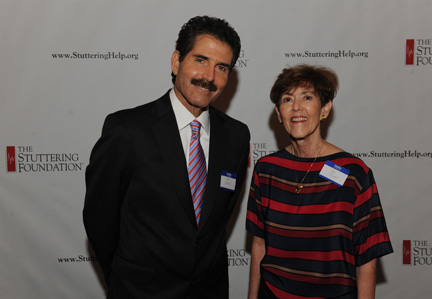 New York (May 8, 2012) – Renowned journalist and commentator John Stossel joined the Stuttering Foundation at a May 8th gala in New York to celebrate National Stuttering Awareness Week and the Foundation’s 65th Anniversary as the world’s leading charitable organization helping those who stutter.

“John has been a long-time friend of the Foundation and a true champion for people who stutter. He readily admits that stuttering is still a concern for him and shows his courage every evening as he faces the camera,” said Jane Fraser, president of the nonprofit organization.

“Awareness is really nothing without action – it involves a willingness to inspire others,” Fraser said. “This award is symbolic of John’s dedication over many years to helping those who stutter.”