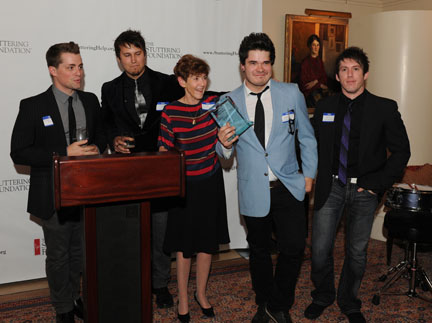 New York (May 8, 2012) – Lead singer for the rock band Hello Kelly, Francois “Francy” Goudreault, Jr., was honored by the Stuttering Foundation at a May 8th gala in New York to celebrate National Stuttering Awareness Week and the Foundation’s 65th Anniversary as the world’s leading charitable organization helping those who stutter.

“In their song Communication Breakdown, Francy and his bandmates have set to music the struggles 68 million people around the world live each day,” said Jane Fraser, president of the Stuttering Foundation. “Francy’s message and achievement amplify hope for a new generation of people who stutter.”

Fraser presented Goudreault with the Foundation’s “Converting Awareness into Action” Award for the hope and inspiration he brings to the stuttering community.