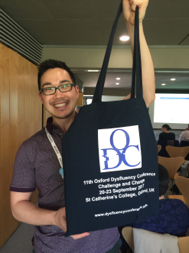 The second half of 2017 started with deep insights from a stuttering ‘expert’. Vince Vawter, author of ‘Paperboy”, shared his personal messages to individuals who stutter, parents of children who stutter and speech clinicians. Vince’s words, “If you are a person who stutters, you have your stories too. We are unique. I challenge you to bask in that uniqueness. Flaunt it”, is a healthy reminder that acceptance if you are a person who stutters. My good friend, Dr Bob Quesal also shared his expert knowledge with my colleagues and I by video-conferencing in from Illinois and speaking to us about ‘Empathy-Based Practice’. For more on Dr Quesal’s discussion on “Empathy-Based Practice’ click here.

Back-to-school posts dominated the Stuttering Foundation’s Facebook page with the Foundation sharing its Back to School page for parents to pass onto their child’s teacher. I also wrote a post about creating safe schools for young people who stutter.

September was a busy month as I prepared for my trip to the 11th Oxford Dysfluency Conference at Oxford University in the United Kingdom. I was fortunate to present a poster on ‘narrative therapy and stuttering’ and caught up with many friends (and made many more!). There were many highlights, however one of my favourite presentations was “Working on desensitisation with parents”, presented by Elaine Kelman and Ali Berquez from the Michael Palin Centre. September was also significant in that Kylie Simmons finally received a response from Homeland Security, almost 2 years from when detained at an airport because of her stutter. Click here to read Kylie’s follow-up story and bravo to this amazing individual for speaking up and creating awareness about stuttering.

Early October was marked with sadness as we said goodbye to Joe Fulcher, husband of Stuttering Foundation President Jane Fraser and Corporate Director of the Foundation. Joe was involved with the Stuttering Foundation for over 30 years. He will be deeply missed by everyone. October 22nd was also International Stuttering Awareness Day (ISAD) and this year the theme was “A world that understands stuttering." This year’s ISAD online conference was a huge success and I encourage people to read the articles and stories shared by many people around the world. One of my favourite papers was Elizabeth Wislar and Hope Gerlach’s illustrated guide on “How to be a Fluent Ally to People who Stutter”.

The baseball world and the stuttering community was still buzzing after the Astro’s George Springer was named the Series MVP, hitting five home runs against the Dodgers. George’s story is one of inspiration and hard work as illustrated by The New York Times’ feature. ESPN also shared his story here, highlighting the work George does with the Stuttering Association for the Young (SAY). On a sadder note, another long-time supporter of The Stuttering Foundation, Mel Tillis, passed away in November. Jane Fraser, president of The Stuttering Foundation said, “Mel was a stalwart supporter and inspiration to many. And he was one of the first to openly talk about his stuttering and urge others to do so.”.

Looking back at 2017 has given me a deeper appreciation for all that has happened in The Stuttering Foundation’s 70th year. There were many newsworthy moments; some inspiring, some sad. We said our goodbyes to two Stuttering Foundation family members, Joe Fulcher and Mel Tillis. Their legacy will be everlasting, much like the legacy of the Stuttering Foundation’s work. George Springer being in the spotlight as World Series’ MVP and my own personal achievement with presenting at the Oxford Dysfluency Conference were my highlights. What were yours?