An interview with actor Eric Roberts 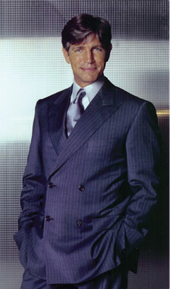 Q: At what age do you remember first being aware that you spoke differently?
A: I can't remember not being aware. In school, when we used to go around the table, each reading a paragraph, I'd count ahead and try to memorize my paragraph.

Q: Is there any history of stuttering in your family?
A: There wasn't that I knew of. I've heard that my mother stutters. Somehow, I don't hear it.

Q: Your daughter Emma definitely had a breakthrough role in this summer's hit movie 'Nancy Drew.' When she was a child did you worry she might develop a stuttering problem?
A: Never thought about it with Emma.

Q: Over the years, Hollywood has still produced movies which portray people who stutter in a negative light. Why do you think Hollywood still cranks out movies like these?
A: Hollywood is basically immature and insecure.

Q: You made 'Best of the Best' with James Earl Jones. Did you ever discuss stuttering with him?
A: I can't actually remember if James and I discussed it. But I sense we have a lot in common.

Q: What was your single most embarrassing moment as a person who stutters?
A: Actually it was on a recent late night talk show. I got on a stuttering jag and the audience got uncomfortable and started laughing. I stayed relaxed, but I didn't have the presence of mind, until afterwards, to acknowledge the stutter and put the audience at ease.

Q: If you could give any piece of advice to a young person who stutters, what would it be?
A: The same advice I give to everyone, which is to do the ongoing work of self acceptance.

Q: When you were growing up, did you have any people who stutter as role models?
A: Actually, that would have been great. But no.