Genetic and Neurological Factors in Stuttering 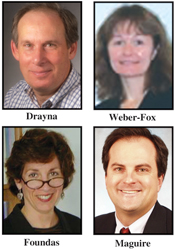 In November, four of the leading scientists in stuttering presented their latest research at the American Speech-Language-Hearing Association convention in San Diego. Participating in a session entitled, 'Genetic and Neurological Correlates of Stuttering," were Drs. Dennis Drayna, NIDCD, Christine Weber-Fox, Purdue University, Ann Foundas, Tulane University, and Gerald Maguire, University of California-Irvine. In a session coordinated by Dr. Christy Ludlow, NIDCD, four presenters focused their discussions on state-of-the-art research in the understanding of genetic and neurological factors that contribute to stuttering. Three of the four researchers, Drs. Drayna, Weber-Fox, and Foundas, have previously contributed articles on their research to past issues of this newsletter.

Dr. Drayna described the current knowledge of the role of genetics in stuttering. He provided an overview of how genetics are studied, including the use of twin and adoption studies and studies of families in Africa.

Despite this genetic evidence, however, Dr. Drayna cautioned that most human medical problems are a combination of genes and 'something else," such as environment or learning. Also, geneticists who study stuttering are almost certain that there are many genes that contribute to stuttering rather than one particular gene having most responsibility. For example, there are over 100 genes that cause deafness.

Dr. Christine Weber-Fox discussed the neurological evidence for how individuals who stutter process linguistic information. Her purpose in pursuing this line of research is to investigate whether individuals who stutter exhibit atypical brain functions when they are processing linguistic information, such as deciding whether a sentence contains a grammatical error or whether two words rhyme. Her work is based on the theory that moments of stuttering, or breakdowns in speech motor control, are related to difficulty processing elements of language such as grammar, retrieving specific words, or processing small units of speech such as individual speech sounds or syllables. She stated that current thinking in this area of research is that there are bidirectional influences between language and motor processing. That is, the complexity of the sentence or timing demands in recalling a specific word seem to influence the individual's ability to generate the necessary sequence of muscle movements to say the sentence, and vice versa.

Dr. Weber-Fox discussed a series of studies she and colleagues at Purdue University have conducted that have led to their conclusion that stuttering is not based solely on an individual's ability to execute a sequence of muscle movements in the mouth, larynx, and respiratory systems but is also determined by language processing.

Her findings for adults who stutter show differences in their ability to accurately judge grammatical information such as verb-agreement violations. This reduced ability was also characterized by differences in the degree and patterns of electrical energy in the brain. Additionally, in a study where individuals had to process different types of words or phrases (e.g., I didn't know what time it was so I looked at my rain), those who stuttered showed a delay in processing that was not seen in individuals who did not stutter.

Because the brain is plastic, or changeable over time with experiences, it is difficult to determine if these differences exist at the onset of stuttering and thus could be partially responsible for the problem. Alternatively, because of plasticity, it might be that living with stuttering over time may contribute to the differences being noted in adults as the brain attempts to compensate for stuttering. Therefore, Dr. Weber-Fox's current research is focusing on making similar types of measurements in children who stutter to determine whether the differences noted for adults are present in younger individuals.

The next presentation was made by Dr. Foundas, who studies the anatomy and function of the brain in individuals who stutter. She is particularly interested in a region of the auditory cortex, known as the planum temporale. The auditory cortex is of special interest in individuals who stutter because of consistent findings that stuttering is reduced during tasks like choral reading or altered auditory feedback, both of which involve auditory input. Earlier research she conducted led to a discovery of atypical planum temporale anatomy in adults who stutter, but it was unknown whether these anatomical differences actually contributed to observable differences in auditory processing. For example, if individuals stutter less when using delayed auditory feedback, or DAF, it might mean that the DAF creates processing changes that make up for deficits caused by the atypical anatomy. Therefore, she and her laboratory colleagues designed a study that used DAF as a stimulus, so that possible changes in brain function might be observed in the planum temporale region.

Individuals who stutter were matched up to an equal number of individuals who do not stutter on the basis of age, sex, education, and handedness. Using MRI, the brains of the subjects in the study were scanned while they read passages in two conditions: with and without DAF. In addition to the brain scans, their fluency was measured in both conditions. Individuals whose fluency improved under DAF were the same individuals who had an atypical planum temporale. Individuals with normal anatomy did not experience improved fluency under DAF.

Dr. Foundas interpreted her findings to suggest that DAF may be a beneficial treatment option for individuals who have an atypical planum temporale, and that perhaps this atypical anatomy is one factor that contributes to the onset of stuttering.

Dr. Maguire's presentation took the research on the brain down to the level of the chemical pathways that are responsible for communicating information and influencing our moods and motor behavior.

He first described the chemical properties of the drugs that have been tested for stuttering and how they were proposed to be of possible benefit for stuttering. Next, he discussed the research studies that tested the various drugs against a placebo. He first covered the drugs that have been found to have limited or no effect on frequency of stuttering. Benzodiazepines were shown to decrease anxiety, but individuals who took the drug showed no differences in their stuttering. Haloperidol, a drug commonly used to treat schizophrenia and other psychotic disorders, improved fluency but had many negative side effects that resulted in poor long-term use of the drug. Verapimil is used to treat hypertension and it had little effect on stuttering. Nimodipine, a calcium channel blocker has also been tested with some positive effect on stuttering but doesn't seem to be a viable drug because of its cost and dosing complications. Pimizide is a drug used to treat individuals who have a tic disorder. It did show some improvement in stuttering but side effects were so significant that further testing was not completed. Paroxetine has also been tested but did not demonstrate significant changes in stuttering.

There are several dopamine blocker drugs that have been shown to have some benefit for stuttering, however. The first, risperdone, Risperdal, is an antipsychotic drug typically used to treat schizophrenia. People taking this drug showed a statistically significant improvement over the placebo, experiencing an approximately 50 percent improvement in their stuttering. Like the other drugs, it has some negative side effects such as weight gain. Another drug, olanzepine, Zyprexa, has shown even greater efficacy in improving stuttering with fewer side effects. Not only did individuals' experience less stuttering as rated by researchers; the patients themselves reported their stuttering had gotten better while taking the drug.

Besides the interesting research being reported by these researchers, the most interesting and promising outcome of the presentation is the likelihood that these scientists may begin working together to develop a comprehensive understanding of how genetics, anatomy, processing, and chemical agents interact in individuals who stutter. Drs. Drayna, Weber-Fox, Foundas, and Maguire were visibly enthusiastic about one another's research and began discussing possibilities for future collaborations. Keep an eye on future Stuttering Foundation newsletters for reports of their future work.