Differences in the Brains of People Who Stutter

Skip to main content Skip to navigation
What are they? How do we know they exist?
By Kate Watkins, Ph.D., St. Anne’s College, University of Oxford
My research group at the University of Oxford in the UK is interested in understanding the role of the brain in fluency disorders. In particular, we are interested in whether brain differences exist in association with stuttering and whether such differences might cause people to stutter. Our research benefits enormously from the availability of MRI scanners, which allow us to obtain exquisite pictures of the brain’s anatomy and its function in only a few minutes. The machines that we use are safe to scan even new-born babies – although we must ensure good hearing protection, as they are very noisy (the scanners not just the babies!). The number of investigations of the brains of children and adults who stutter has increased considerably in recent years due to the availability and convenience of MRI scanners. What has this research told us about stuttering?  Do we have any consensus regarding the brain differences that are observed in people who stutter? In this short article, I explain one set of results that, in my view, has provided us with a consistent pattern of abnormality in the brain’s structure across many different groups of people who stutter. There are results from other studies that point to differences in the brain’s function, too.  But, here, I will focus only on differences in the brain’s structure and explain what the researchers have found in these studies and what their findings actually mean. 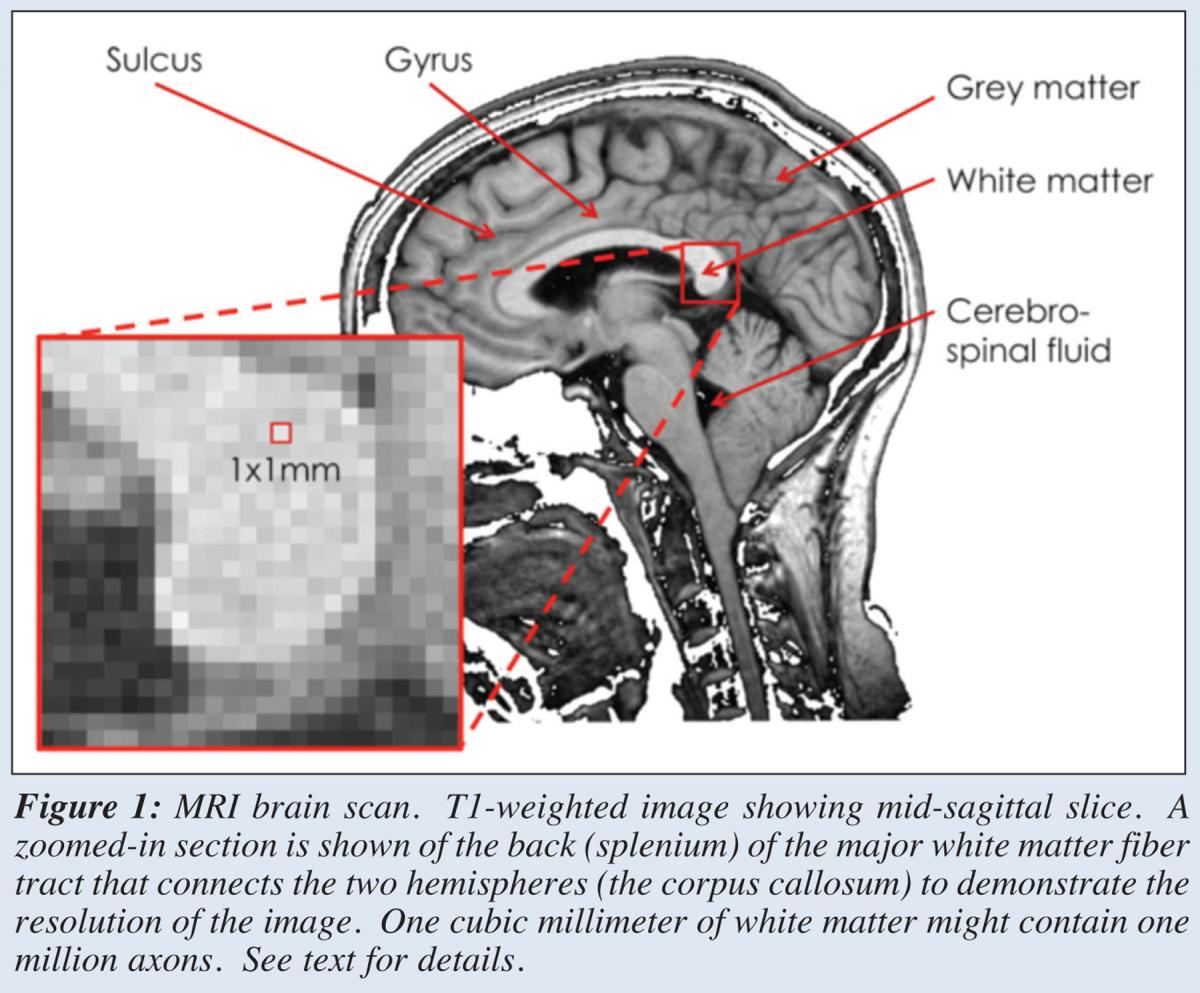 In almost every MRI study of the brain, researchers obtain an image like the one here that shows gray matter as gray, white matter as white and the skull and the cerebrospinal fluid, which bathes and supports the brain, as black (Figure 1). The scalp, muscle and fat tissue of the head also show up as varying shades of gray. The brain’s outer layer is cortex (like the bark of a tree) and contains the cell bodies of neurons, where the nucleus is located and which cause the tissue to look darker, hence gray matter. Gray matter is also found deeper in the brain where groups of cells form larger functional units also known (confusingly) as nuclei – for example, the basal ganglia nuclei are subcortical gray matter structures that when diseased cause movement disorders such as Parkinson’s disease. In between the cortex and the subcortical nuclei lies white matter. This contains bundles of fibre that carry axons from cell bodies in gray matter to communicate with neuron elsewhere in the brain or in the spinal cord.  The reason white matter is white is because the axons are typically sheathed in a fatty substance called myelin, which improves the speed at which they conduct signals.
Many studies of stuttering used an MRI method called diffusion-tensor imaging to examine the organization of the white matter in the brain.  Diffusion MRI is able to determine the orientation of white matter fiber bundles by examining the movement of water. Water molecules diffuse easily in watery substances when there are no barriers to diffusion.  The cerebrospinal fluid that bathes the brain is very watery and diffusion is high in this substance and equal in all directions because there are no barriers. Imagine how quickly and completely a drop of blue ink would turn the water inside a coconut blue because diffusion in watery substances is high. Gray matter is more like the inside of an eggplant, diffusion is low in gray matter (and eggplants) because there is less water and there are lots of cell bodies, membranes and fibers to reduce the movement of water. In white matter, however, we see highly constrained diffusion due to the fiber bundles. These might be considered like the fibers inside a stalk of celery. These fibers would take up blue ink and it could move along them considerably more easily and quickly than across the grain of the celery stalk. In the white matter, it is similarly much easier for water to diffuse along the direction of the axon fiber bundles than across them.  This leads to a bias in the movement of water that is described by a mathematical ratio known as fractional anisotropy or FA. FA is high when water moves mainly in one direction – isotropy would indicate equal movements in all directions (like in coconut water or CSF). By measuring the diffusion of water in lots of different directions in all parts of the brain, we can guess at the organization of the underlying white matter structure and work out the direction in which axons are oriented within fiber bundles.
In people who stutter, diffusion studies have revealed brain areas with consistently lower FA when compared with people who are normally fluent. The exact location of this kind of abnormality varies from study to study but corresponds roughly to the region underneath the cortex involved in producing movements of the tongue, lips and larynx. The region is called the ventral sensorimotor cortex. The white matter underneath it could connect this cortex with subcortical areas also involved in movement control or with other cortical areas involved in planning speech or in perceiving speech. Scientists disagree about whether these results are reliable or not but my own view is that they show surprising consistency. That’s not to say that there aren’t other differences in other brain areas, too. It is striking, however, that so many different studies have been able to replicate a finding first described about 10 years ago in a small group of adult men who stutter. 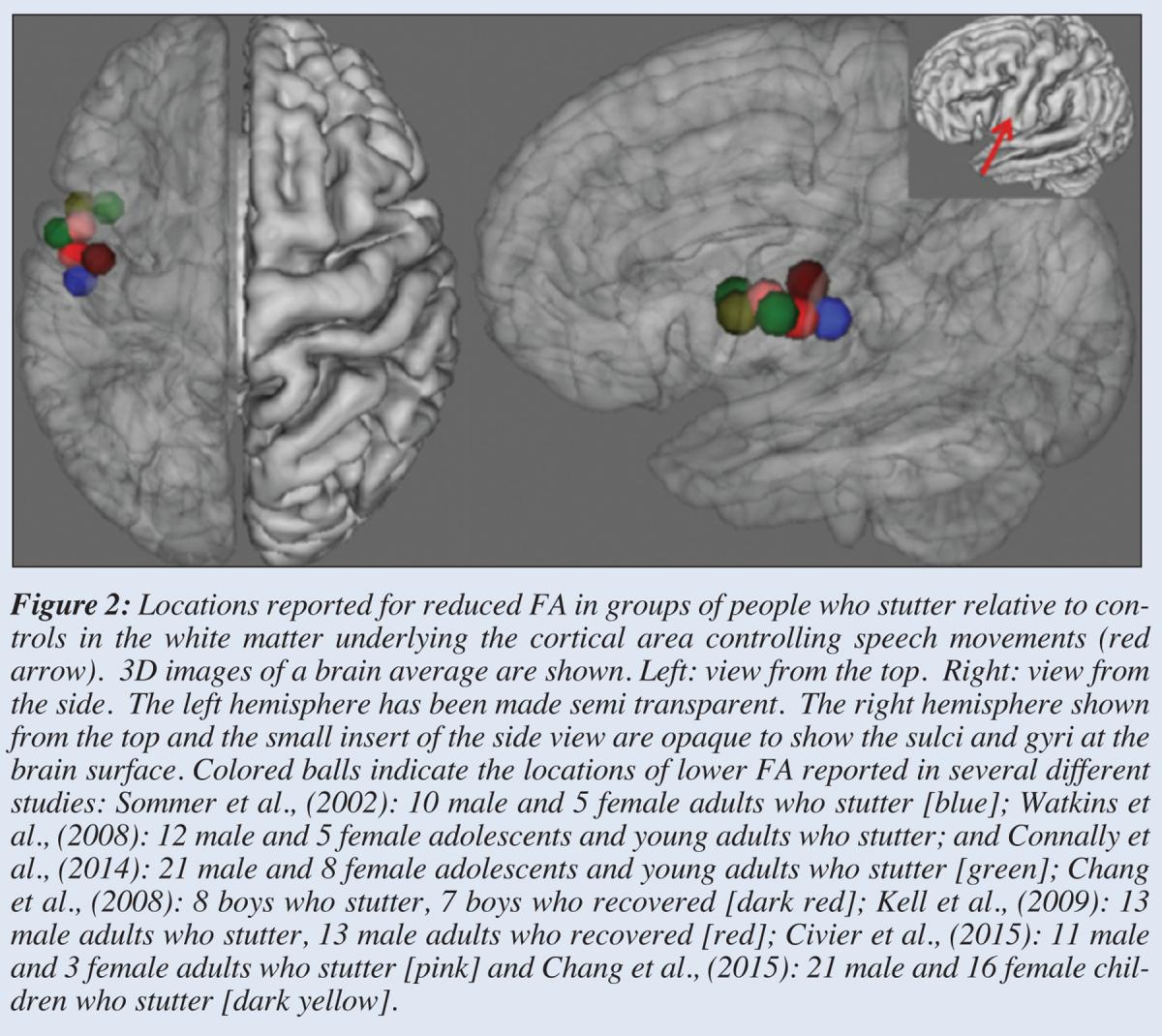 What does it mean to have lower FA? Strictly speaking, it means that there is no strong bias in the direction in which water diffuses at that location. Water movement is not constrained by organized structure such as fiber bundles containing the axons of neurons sheathed in myelin to insulate them. So a lack of organized structure could reflect fewer connections in this area or connections travelling in multiple directions crossing each other rather than lining up to travel in one direction.  Lower FA can be associated with diseases or damage. For example, people with multiple sclerosis have brain areas with abnormally low FA because their axons lose their fatty myelin sheath and their ability to conduct signals between brain areas rapidly. But lower FA also exists in parts of the brain where lots of fiber tracts intersect and cross over – like a complicated highway interchange. We need to do more work to understand these results more fully.  Important questions remain unanswered. For example, are the differences observed causes or consequences of stuttering? The fact that we see these differences in young children who were studied close to the time of diagnosis is suggestive of causality. But further work is needed to follow these changes over development and determine whether they are reversible if treatment is successful.
From the Summer 2016 Newsletter