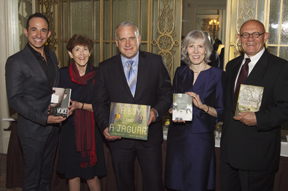 NEW YORK (May 13, 2014) — To celebrate National Stuttering Awareness Week, May 12-18, the Stuttering Foundation (www.StutteringHelp.org) honored four authors whose recent books are widely acclaimed by both critics and readers alike.

In a reception at The Lotos Club, a gathering place for writers, journalists and critics since 1870, Foundation President Jane Fraser noted, “Authors with the courage to share their stories and inspire others hold a special place in the hearts of the 70 million people worldwide who struggle to speak.

“An intimate look into the world of stuttering makes these four books so very special. These authors have truly captured the very essence of stuttering.

“Because books have played such an important role in our organization for seven decades, we are pleased to recognize these shining stars,” added Fraser.

Those honored at the event include:

• Dr. Alan Rabinowitz, A Boy and A Jaguar

The Stuttering Foundation — known internationally for the quality of its resource materials available to the public — offers videos, DVDs, books, brochures, newsletters and referrals through its website www.StutteringHelp.org as well as its toll-free helpline: 800-992-9392.

Foundation books have been translated into 36 languages ranging from Spanish to Swahili. Currently, the Foundation offers 32 books on the subject of stuttering through its online store.

Jane Fraser is president of The Stuttering Foundation and co-author of If Your Child Stutters: A Guide for Parents, 8th edition. She is also vice president of the Action for Stammering Children, Michael Palin Centre in London.

Malcolm Fraser, a successful businessman and stutterer, established and endowed the nonprofit Stuttering Foundation in 1947. The Stuttering Foundation provides a toll-free helpline, 800-992-9392, and free online resources on its Website, www.StutteringHelp.org, including services, referrals and support to people who stutter and their families, as well as support for research into the causes of stuttering.