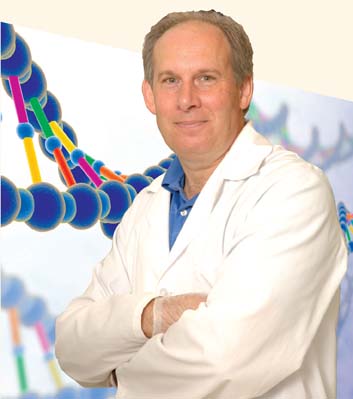 MEMPHIS, Tenn. (Summer 2010) — The mystery behind a complex disorder called stuttering became a little clearer today with the announcement of the discovery of three genes for stuttering by Dennis Drayna, Ph.D., a director of the Stuttering Foundation and researcher for the National Institute on Deafness and Other Communication Disorders.

“This research is important because it’s another indication that emotional factors such as anxiety or ‘bad parenting’ do not cause stuttering. It could also point the way for a cure one day,” says Jane Fraser, president of the nonprofit Stuttering Foundation.

“We hear every day from parents worried that they have caused their child’s stuttering. Parents don’t cause stuttering, and this research should lift the burden of guilt from their shoulders,” Fraser noted. “But because a cure may be years away, speech therapy and early intervention with young children remain the best option for now.”

“We have long known that stuttering runs in families,” says Fraser. “We want to emphasize that a genetic predisposition for stuttering does not mean a person will have a lifelong problem. Early treatment in young children can effectively prevent stuttering.”

Developing an understanding of the biological basis of stuttering may someday lead to better early diagnosis, differential treatments for people with genetic indicators, and a better understanding of how speech production happens differently for people who stutter. Although Dr. Drayna notes that his findings are unlikely to have any immediate impact on treatment, they nonetheless represent a giant step forward.

Stuttering may be the result of a glitch in the day-to-day process by which cellular components in key regions of the brain are broken down and recycled, says a study in the Feb. 10 Online First issue of the New England Journal of Medicine. The study, led by researchers at the National Institute on Deafness and Other Communication Disorders (NIDCD), part of the National Institutes of Health, has identified three genes as a source of stuttering in volunteers in Pakistan, the United States, and England. Mutations in two of the genes have already been implicated in other rare metabolic disorders also involved in cell recycling, while mutations in a third, closely related, gene have now been shown to be associated for the first time with a disorder in humans.

“For hundreds of years, the cause of stuttering has remained a mystery for researchers and health care professionals alike, not to mention people who stutter and their families,” said James F. Battey, Jr., M.D., Ph.D., director of the NIDCD. “This is the first study to pinpoint specific gene mutations as the potential cause of stuttering, a disorder that affects 3 million Americans, and by doing so, might lead to a dramatic expansion in our options for treatment.”

Stuttering is a speech disorder in which a person repeats or prolongs sounds, syllables, or words, disrupting the normal flow of speech. It can severely hinder communication and a person’s quality of life. Most children who stutter will outgrow stuttering, although many do not; roughly 1 percent of adults stutter worldwide.  Current therapies for adults who stutter have focused on such strategies as reducing anxiety, regulating breathing and rate of speech, and using electronic devices to help improve fluency.

Stuttering tends to run in families, and researchers have long suspected a genetic component. Previous studies of stuttering in a group of families from Pakistan had been done by Dennis Drayna, Ph.D., a geneticist with the NIDCD, which indicated a place on chromosome 12 that was likely to harbor a gene variant that caused this disorder.

In the latest research, Dr. Drayna and his team refined the location of this place on chromosome 12 and focused their efforts on the new site. They sequenced the genes surrounding a new marker and identified mutations in a gene known as GNPTAB in the affected family members. The GNPTAB gene is carried by all higher animals, and helps encode an enzyme that assists in breaking down and recycling cellular components, a process that takes place inside a cell structure called the lysosome.

GNPTAB encodes its enzyme with the help of another gene called GNPTG. In addition, a second enzyme, called NAGPA, acts at the next step in this process. Together, these enzymes make up the signaling mechanism that cells use to steer a variety of enzymes to the lysosome to do their work. Because of the close relationship among the three genes in this process, the GNPTG and NAGPA genes were the next logical place for the researchers to look for possible mutations in people who stutter. Indeed, when they examined these two genes, they found mutations in individuals who stutter, but not in control groups.

The GNPTAB and GNPTG genes have already been tied to two serious metabolic diseases known as mucolipidosis (ML) II and III. MLII and MLIII are part of a group of diseases called lysosomal storage disorders because improperly recycled cell components accumulate in the lysosome. Large deposits of these substances ultimately cause joint, skeletal system, heart, liver, and other health problems as well as developmental problems in the brain. They are also known to cause problems with speech.

“You might ask, why don’t people with the stuttering mutations have more serious complications? Why don’t they have an ML disease?” posed Dr. Drayna, senior author of the paper. “ML disorders are recessive. You need to have two copies of a defective gene in order to get the disease. Nearly all of the unrelated individuals in our study who stuttered had only one copy of the mutation. Also, with stuttering, the protein is still made, but it’s not made exactly right. With ML diseases, the proteins typically aren’t made at all. Still, there are a few complexities remaining to be understood, and we’d like to learn more about them.”

The findings open new research avenues into possible treatments for stuttering. For example, current treatment methods for some lysosomal storage disorders involve injecting manufactured enzyme into a person’s bloodstream to replace the missing enzyme. The researchers wonder if enzyme replacement therapy might be a possible method for treating some types of stuttering in the future.

The researchers estimate that roughly 9 percent of people who stutter possess mutations in one of the three genes. Among the next steps, they are conducting a worldwide epidemiological study to better determine the percentage of people who carry one or more of these mutations. They are also conducting biochemical studies to determine specifically how the mutations affect the enzymes.  A long-term goal is to use these findings to determine how this metabolic defect affects structures within the brain that are essential for fluent speech.

In addition to the NIDCD, researchers at the University of Punjab, Lahore, Pakistan; the Hollins Communications Research Institute, Roanoke, Va.; the National Human Genome Research Institute (NHGRI); and the NIH Clinical Center contributed to this work.

NHGRI is one of the 27 institutes and centers at the NIH, an agency of the Department of Health and Human Services. The NHGRI Division of Intramural Research develops and implements technology to understand, diagnose and treat genomic and genetic diseases. Additional information about NHGRI can be found at its Web site, www.genome.gov.

The NIH Clinical Center (CC) is the clinical research hospital for the National Institutes of Health. Through clinical research, physician-investigators translate laboratory discoveries into better treatments, therapies and interventions to improve the nation's health. For more information, visit http://clinicalcenter.nih.gov.

NIDCD supports and conducts research and research training on the normal and disordered processes of hearing, balance, smell, taste, voice, speech and language and provides health information, based upon scientific discovery, to the public. For more information about NIDCD programs, see the Web site at www.nidcd.nih.gov.

The National Institutes of Health—The Nation's Medical Research Agency — includes 27 institutes and centers and is a component of the U.S. Department of Health and Human Services. It is the primary federal agency for conducting and supporting basic, clinical and translational medical research, and it investigates the causes, treatments and cures for both common and rare diseases. For more information about NIH and its programs, visit www.nih.gov.