The Stuttering Foundation: Giving a Voice to People Who Stutter for 65 Years

MEMPHIS, Tenn. (December 19, 2012) — The Stuttering Foundation, www.StutteringHelp.org, celebrates its 65th anniversary this year, marking more than six decades as the world’s foremost non-profit dedicated to helping those who stutter. 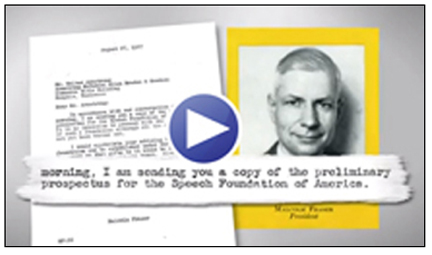 Founded on December 27, 1947, with an initial bank deposit of $2,500 by the late auto parts magnate Malcolm Fraser, himself a stutterer, the Stuttering Foundation has been run by Fraser’s daughter, Jane for more than 30 years. Over the decades, the Foundation has provided help and support to persons who stutter in a number of ways.
"Our goal is simple, to provide effective and accurate materials, up-to-date training and hope to those who stutter, their families, and the dedicated therapists who help them,” said Foundation President Jane Fraser.
Today, the Foundation:
• has received more than 44,000,000 hits on its website, www.StutteringHelp.org, which archives content including e-Books, streaming video, brochures for all ages, continuing education, speech-language pathologist referrals in 55 countries, and materials translated into 12 different languages.
• publishes and distributes more than half a million books and brochures on stuttering therapy each year, reaching readers in all 50 states and more than 136 nations;
• responds annually to more than 25,000 telephone calls to its toll-free Helpline (800-992-9392) from those who stutter, their families, and speech-language pathologists;
• publishes quarterly newsletters about major developments in the stuttering community for its vast distribution list;
• has a streaming video library on its website and its YouTube channel and has placed video programs in more than 8,500 public libraries that provide help for stuttering; more than 273,809 people have viewed the YouTube channel this year alone;
• has conducted more than 1,000 media interviews with television and radio stations, newspapers, websites, magazines and bloggers during the past year to raise awareness of stuttering and its treatment;
• uses social media such as a blog, Facebook, Twitter, Tumblr, and Pinterest to disseminate information to the stuttering community;
• generates hundreds and hundreds each in print and television/radio public service announcements regarding how people who stutter can receive help;
• Has offered intensive training programs to speech therapists in all 50 states and more than 40 countries;
The Stuttering Foundation also provides a list of famous people who stutter on its website, which is often used by journalists in articles about stuttering. Many of the statesmen and celebrities listed have served the stuttering community as spokespeople to raise awareness about the disorder and its treatment.
“There are few in life who are as determined to apply a no-nonsense, businesslike mind to the cause of helping others,” said long-time friend and Foundation board member Jimmy Garrison. “Stuttering didn’t prevent Malcolm from realizing his dreams; in a sense, it liberated him. It opened the doors to a fruitful career that has touched millions, and he left a legacy – the work of the Stuttering Foundation – that will keep his mission and goals alive in perpetuity.”
“We remain dedicated to the vision my father, Malcolm, had in 1947 – giving a voice to people who stutter and continuously working to update the means by which we reach out to the stuttering community and the public with our messages of hope and inspiration for the nearly 70 million people worldwide who stutter, and their families,” added Jane Fraser.
For more information about the Stuttering Foundation, please visit www.StutteringHelp.org.
###
Editor’s Note: Jane Fraser is available for interviews via Skype, telephone, or in person. For additional information, view our 65th anniversary newsletter and visit media resources on our website.
Foundation Spokesperson Jane Fraser
Jane Fraser is president of The Stuttering Foundation and co-author of If Your Child Stutters: A Guide for Parents, 8th edition. She is also vice president of the Association for Research into Stammering in Childhood, Michael Palin Centre, London. Ms. Fraser is available for interviews by contacting Greg Wilson, 571-239-7474 or email: gregwilsonpr@gmail.com. Download a picture of Jane Fraser.
About the Foundation
Malcolm Fraser, a successful businessman and stutterer, went on to establish and endow the nonprofit Stuttering Foundation in 1947. The Stuttering Foundation provides a toll-free helpline, 800-992-9392, and free online resources on its Website, www.StutteringHelp.org, including services, referrals and support to people who stutter and their families, as well as support for research into the causes of stuttering. Please visit us at www.StutteringHelp.org.