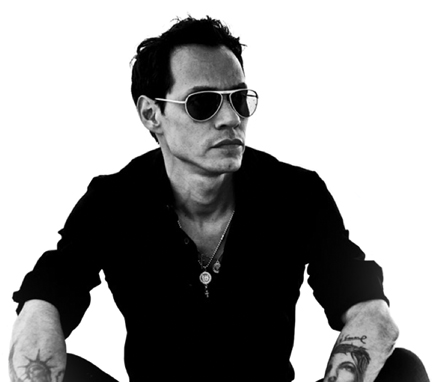 Marc Anthony was destined to be a singer in more ways than one. First, born in New York City in 1968 as Marco Antonio Muniz to Puerto Rican parents, his parents named him after the famous Mexican singer of the same name. With that name he had a lot to live up to, and when he embarked on his own singing career, he changed his name to Marc Anthony to avoid confusion with his namesake, the famous Mexican singer.
Second, the young East Harlem resident struggled with stuttering in his early years and found singing as a way to break free of his stuttering bonds.
A June 8, 2011, Zap2it article by Jacqueline Culter summed up his childhood in El Barrio, as East Harlem is known. The article opens with, “For a kid from the projects of El Barrio who was in bilingual classes and who stuttered, Marc Anthony has done alright.” The article quotes the singer as saying, “I used to stutter. And when I sang, I didn’t stutter, and singing became my safe haven. Someone asked me, ‘When did you decide to become a singer?’ I didn’t formally decide. It was just something I was born to do. It was where I lived.”
In the Spanish-language magazine Nexos, a profile on Marc Anthony, “Q’Viva Marc Anthony” by Rosanna Ubannell, begins with “When a human being decides to break free from his chains, the world understands that nothing is impossible.” This is the case of Marc Anthony: as a child the only way he had to avoid stuttering was to sing. Similarly, the Chilean newspaper Mega published an article on July 23, 2013, entitled “Marc Anthony confessed that he began to sing to overcome his stuttering” about statements the singer gave at a press conference in conjunction with his popular record Marc Anthony 3.0. The article states that Marc Anthony is extremely thankful that music taught him how to express himself; he found, thanks to singing he not only discovered his talent to sing, but also a way to control his stuttering.
In the wake of the success of The King’s Speech, an article on the Univision website titled “10 Stutterers Who Became Famous” listed Marc Anthony as the number one “person of interest” in this category.
Marc Anthony’s musical accomplishments and his high-profile marriage to and divorce from Jennifer Lopez have of course pushed his battles with stuttering into the background.
In addition to being a singer, he is also a singer/songwriter, an actor, record producer, and television producer. The singer has won two Grammys in addition to three Latino Grammys, and countless achievement awards in the Latino community. His Latin salsa song list has resulted in the sale of 13 million albums worldwide.
Before breaking out on his own, Anthony found success as a songwriter and backing vocalist for numerous Latin groups such as Menudo and the Latin Rascals. Initially reluctant to record salsa, he changed his mind and released his debut Spanish-language album, Otra Nota, which earned him recognition and high marks from the Latin audience. His second Latin album, Toda a Su Tiempo, landed the emerging star a Billboard award for Hot Tropical Artist of the Year; the album was also nominated for a Grammy.
Marc Anthony overcame his stuttering on the way to becoming a worldwide superstar singer. The fact that he has been so open about his struggles with stuttering no doubt will serve to inspire young people who are also dealing with stuttering. In addition, having Puerto Rican parents and being bilingual gives the worldwide Latino stuttering community a true hero as well. With all of Marc Anthony’s diverse roles in entertainment, it should be noted that he is a role model for sure.
Photo credit: Marc Anthony on the home page of his website, www.MarcAnthonyOnline.com
From the Winter 2014 Newsletter