Problem with “One Size Fits All” 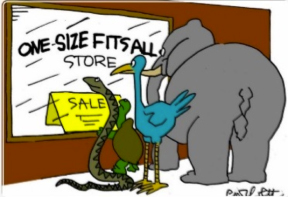 I was recently made aware of Speech Pathology Australia’s* proposal to the Australian government to provide reimbursement for families who received only one type of treatment for pre-schoolers who stutter (submitted proposal). One could argue that the proposal is helpful in providing affordable treatment for parents of pre-schoolers who stutter. However, I believe that the negatives outweigh the positive for the following reasons:

1) The concern of the consumer’s (child and parent) and service provider’s (speech-language pathologist)freedom of choice being taken away and subsequently the ability to jointly decide on what works ‘best’ for the consumer.

This concern transcends preschool stuttering therapy and applies to all other facets of health care. To demonstrate the point, I would encourage you to Google “one+size+fits+all” with any human condition (i.e. asthma, anxiety, cancer and so on) to see that there is never one treatment approach which successfully remediates any of these conditions. The bottom line is that each child is different and therapy needs to be tailored to the individual needs of the child and the family. Prescribing a single treatment program to all pre-schoolers who stutter is not the answer.

2) We know that there is a range of treatment options for preschool children who stutter which have been researched and published in scientific journal articles (see reference list). So far one approach has not been identified as being superior to another approach.

I have been fortunate to be trained in Demands and Capacities treatment, Palin Parent Child Interaction therapy as well as the Lidcombe Program and each approach has been effective in stuttering prevention in young children.

I recently had one family select a Demands and Capacities treatment approach because the mother felt that her son would not respond well to his speech being praised and/or gently corrected. Some of the other factors, which contributed to the decision-making process, included the dad being a person who stutters himself — and not feeling comfortable with the idea that his son’s bumpy talking had to be ‘corrected’ — the child having a sensitive temperament and the child having high standards of his own speech fluency.

Together, Mom and I spent six sessions learning how to modify her communicative interactions and reduce the environmental demands so that her son could develop fluent speech. At follow up twelve months later, the family had no concerns and the child was speaking fluently.

To summarise, if we are to be effective in treating stuttering, we need to be a Swiss army knife and know when to use each tool/treatment approach as opposed to being a hammer and trying to force a ‘square peg into a round hole’.

Speech Pathology Australia’s aim to reduce the cost of stuttering treatment for pre-schoolers is a step in the right direction. However, to endorse only one approach, and one that has not been shown to be superior to other approaches is a major misstep in health care.

Finally, to limit the choices consumers have in preschool stuttering therapy is a disservice to parents of children who stutter and to speech language pathologists. Parents who seek help for their pre-schooler who stutters have a right to select a treatment approach that would best suit their family. To have no choice in the matter — despite all the research evidence any treatment program may have — would be unethical.