Please read the entire page in honor of James. 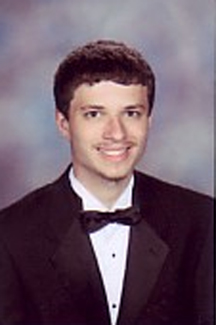 Memorial gifts in memory and in honor of James Michael Campbell can be made in the following ways:

Mail a check in his memory to:

or click here to make an online donation in his memory

or call toll-free and make a credit card donation by phone:

The Stuttering Foundation is a 501(c)(3) organization. Gifts are tax-deductible.

James Michael Campbell, age 17, of Sterling, VA, died unexpectedly Sunday, October 23, 2011.  James was a lifelong resident of the Northern Virginia area and a senior at Park View High School in Sterling, VA.  He had stuttered all his life and had attended an intensive treatment program at HCRI. He was born April 24, 1994, to Tracy Hart Campbell and the late Charles Ray Campbell.

Memorial contributions may be made to the Stuttering Foundation of America, www.StutteringHelp.org.

Almost everyone has a day that they will never forget. It’s a day that can be one of the happiest days or one of the saddest days in a person’s life. October 23, 2011, was one of those days I will never forget.  That was the day my nephew James Campbell tragically took his own life.  James was only 17 years old.  For years to come people will ask “why?”  “Why did James end his life at such a young age”?  I, too, have been asking this question.  As the grief, anger, sadness and disbelief continually swirl in my mind, I keep coming back to the speech disorder that James had suffered through for years. James was a stutterer.

James was a teenager who loved to have fun. He had a great personality and positive outlook.  But in his mind, all the positive features in the world could not trump the negative that he could not shed. His stuttering. Oftentimes, James was a recluse because of his speech disorder. He would communicate with his friends through Facebook. Why through Facebook? Because he didn’t have to talk. A computer could speak for him.

Imagine being a teenager who stutters and has to give a presentation in front of the class?  This had to be a frightening feeling for James. Not only will the entire class be watching, but trying to speak fluently was more than a challenge…it was impossible.

As James got older, the stuttering became more and more of a handicap for him. He saw his disability as a hindrance to his future. On Sunday, October 23, James felt he could no longer go on. He made the decision that he wanted to be with his father who had passed away 13 years earlier in a tragic accident. James really didn’t know his father that well, as he was only 4 at the time, but the absence of his father profoundly affected him.

As we say good-bye to James and try to piece together our own lives, I would hope that we can prevent another “James” situation. There is no need to have another teenager take their own life with the explanation that they feel the burden of being a stutterer has become unbearable. In an effort to help other stuttering teenagers, we would like to set up the James Campbell Stuttering Memorial.

Hopefully, the end of James’ life can be the start of someone else’s life. In honor of James Michael Campbell, we look forward to helping other stuttering teenagers so they can live a happy and exciting life, embracing all that a life unhindered by stuttering can offer.