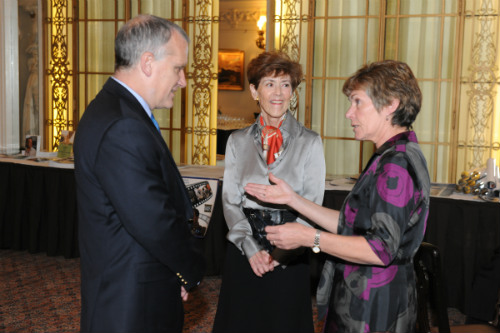 The King’s Speech, which will be released on DVD tomorrow, is enthusiastically supported by the stuttering community for the positive attention it has brought to stuttering.

The Stuttering Foundation’s captivating public service announcement plays a starring role on every copy of the DVD.

“The King’s Speech has raised awareness of stuttering beyond any level we could ever have imagined. The actors’ incredibly accurate portrayal of the anguish faced by people who stutter has been instrumental in opening up honest dialogue about stuttering and its treatment,” said Jane Fraser, president of the Stuttering Foundation. She also thanked the film’s director and screenwriter “for giving us a hero and a movie we can look to for inspiration, much as my father looked to King George VI more than six decades ago.”

“We hope a copy of The King’s Speech DVD will end up in the home of every person who stutters and in schools and universities around the world,” added Fraser. “It is a story worth seeing over and over again for years to come.”

Stuttering and the Big Cats

In Stuttering and the Big Cats, Dr. Rabinowitz, president and CEO of New York-based Panthera, shares his life-long struggle to overcome stuttering through his work protecting the world’s largest and most imperiled cats. The film captures his address to young people who stutter at the annual convention of Friends, a national support group for kids.

Rabinowitz was honored at a gala event in New York City today to introduce the film internationally.

“Alan’s courage is particularly inspiring to young people whose career paths have yet to be decided and for whom stuttering often seems an insurmountable obstacle. Through hard work, perseverance and dedication to his true passions, Alan never let stuttering hold him back from his quest to help endangered animals,” said Jane Fraser, president of the Stuttering Foundation. “We are proud to make this video available and hope that every young person who stutters has an opportunity to hear Alan’s story.”

"I recall vividly as a child staring at a jaguar as he paced in his cage at the zoo," said Alan Rabinowitz, president and CEO of Panthera. "He was trapped, seeking a way out of a dark world, something I related to strongly at the time. And I knew then that when I found my voice, I would use it for him, for saving big cats around the world. My love for wildlife and the urgency needed to save the big cats helped me overcome stuttering. This life-long quest has resulted in Panthera – which is now my platform for speaking loudly for, and working to save, some of the planets greatest species."

The availability of Stuttering and the Big Cats is an example of the Stuttering Foundation’s “Converting Awareness into Action” effort, which builds upon the overwhelmingly positive attention stuttering has gained through the release of The King’s Speech.

About the Foundation
Malcolm Fraser felt the same dread of speaking in public that King George VI experienced in the 1940s. Inspired by the plight of “Bertie”, Fraser, a successful businessman and stutterer, went on to establish and endow the 64-year-old nonprofit Stuttering Foundation in 1947. The Stuttering Foundation provides a toll-free helpline, 800-992-9392, and free online resources on its Website, www.StutteringHelp.org, including services, referrals and support to people who stutter and their families, as well as support for research into the causes of stuttering. Please visit us at www.StutteringHelp.org.

About Panthera
Panthera, founded in 2006, is the world’s leading organization devoted exclusively to the conservation of wild cats and their ecosystems. Utilizing the expertise of the world’s premier cat biologists, Panthera develops and implements global conservation strategies for the largest, most imperiled cats – tigers, lions, jaguars and snow leopards. Representing the most comprehensive effort of its kind, Panthera works in partnership with local and international NGOs, scientific institutions, local communities and governments. Visit http://www.panthera.org/.

About Dr. Alan Rabinowitz
Dr. Alan Rabinowitz is the president and CEO of Panthera, a nonprofit dedicated to saving the world’s wild cat species. Dr. Rabinowitz is one of the world’s leading big cat experts, and has been called ‘The Indiana Jones of Wildlife Conservation’ by TIME Magazine. He has authored over one hundred scientific and popular articles and six books, and has been featured in numerous documentaries including BBC’s Lost Land of the Tiger and National Geographic’s In Search of the Jaguar; and on TV specials including the Colbert Report, CBS 60 Minutes and CNN. To learn more, please visit www.panthera.org

About The Michael Palin Centre for Stammering Children
The Michael Palin Centre for Stammering Children was opened in 1993 by the actor and writer, Michael Palin, to provide practical help for children and young people who stammer and their families.  The Centre is currently staffed by a team of eleven specialist speech and language therapists and provides an expert assessment and therapy service for children and young adults from all parts of the UK.  The Centre also conducts a full teaching programme for speech and language therapists in its assessment and treatment methods, in the use of cognitive and brief therapy in the treatment of stammering, and in research and its application to clinical practice.  The Centre has a research programme to investigate the causes and effective treatment of stammering.

The Stuttering Foundation has supported the work of the Michael Palin Centre since 2006 through the charity, the Association for Research into Stammering in Childhood.