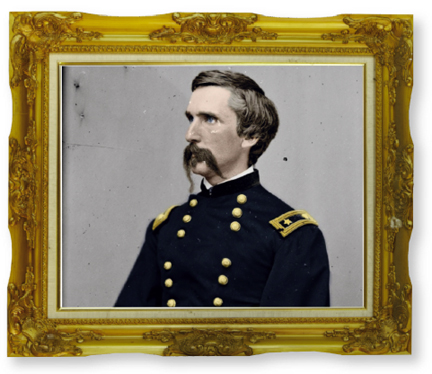 While in the Internet era there has been no shortage of entertainers and other celebrities who are famous people who stutter, prominent figures in U.S. history have also risen above their stuttering to achieve success. Of these many people who stutter who are prominent in American history, two are Cotton Mather, the Puritan leader of colonial America and one of the most prolific writers in American history, and  Joshua Chamberlain, a famous Union Army general and hero of the Civil War. More about Mather in the next newsletter.
Joshua Chamberlain (1828-1914) was born and raised in Brewer, Maine. From an early age, his stuttering was evident and presented a conflict to the young Chamberlain. His mother constantly voiced that she wanted Joshua to become a preacher while his father encouraged his young son to follow in the line of the many Chamberlains who were military men. The youngster knew at an early age that his speech would be a factor in pursuing either of the two professions.
Entering Bowdoin College in his native Maine, like many people who stutter, Chamberlain relished having fluent speech in foreign languages. Before the end of his college career, he was fluent in nine languages apart from English – Spanish, German, French, Italian, Greek, Latin, Arabic, Hebrew and Syriac. However, his main focus was religious studies as he spent three years in a seminary after college graduation.
To say that the prolific military career of General Joshua Chamberlain cannot be summed up in a single paragraph is an understatement. As a colonel, his amazing performance at the Battle of Gettysburg in the Civil War put him on the fast track towards the rank of Brigadier General. He was involved in 20 battles, cited for bravery numerous times, was wounded four times, and was famous for having six horses shot dead under him. After his brilliant military career, Chamberlain would return to his native Maine to serve four one-year terms as governor, and then returned to his alma mater Bowdoin College to serve as the school’s president for twelve years.
Conceived in Liberty: Joshua Chamberlain, William Oates and the American Civil War, a 1997 book by Mark Perry, describes Chamberlain’s speech and its impact, “Chamberlain’s stammer was more than a worrisome problem: left unsolved, it would have an enormous impact on his life – and on his mother’s dream that he become a minister.”
It continued, “While the problem undoubtedly focused the young Chamberlain on the written word (and helped to focus his attention on scholarship), the stammer was a constant worry that no one in the family knew how to solve. As Chamberlain’s efforts at communication became increasingly difficult, and sometimes embarrassing, he spoke as little as possible and spent more and more of his free time in isolation.”
While a student at Bowdoin College, the young Chamberlain finally decided to apply the same attention overcoming his stuttering as he did to his studies. Perry’s book states, “The speech problem loomed over everything in Chamberlain’s life, interfering with his scholarly recitations, his personal life, and his stillborn friendships.”
Finally, he sought out help from Alpheus Packard, Bowdoin’s professor of ancient languages and a self-styled speech correctionist of sorts. “Under Packard’s tutelage, Chamberlain taught himself to recognize word hurdles in his speech – and then learned to ‘sing’ his way through them.’ With the help of Packard, and the rigorous application of the same principles that helped him pass Greek, Chamberlain slowly mastered his problem, but his speech was never effortless.
To the end of his life his sentences were filled with strange hesitations and irregular rhythms, a habit that some put down to his great erudition.”
Later in his life, Chamberlain said his struggles with stuttering “may have reached into the whole of my life.”
From the Fall 2015 Newsletter