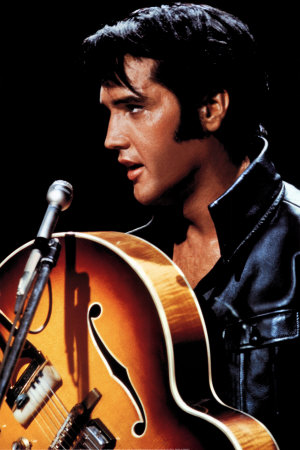 Elvis Presley, known as The King of Rock and Roll, was an American singer and actor beloved by millions all over the world for his unique style of music and provocative dance moves. Though he is widely considered one of the biggest cultural icons of the 20th century, many may not know that Elvis stuttered.

Presley was born in Tupelo, Mississippi in 1935. A 2015 biography, Elvis: Behind The Legend: Startling Truths About The King of Rock and Roll's Life, Loves, Films and Music, presents evidence of Presley's stuttering. According to Examiner.com, the book shares details of an interview with Elvis’ childhood girlfriend, Mary Magdalene Morgan. In a 2007 interview, she recalled that Elvis would stutter in elementary school. “He always seemed nervous. He could never completely sit still,” Morgan said. “He stuttered but not to the point you couldn’t understand him. It was like, ‘Ah…ah…ah.’”

When he was 13 years old, his family moved to Memphis, Tennessee, where he would listen to a variety of musicians and singers on the now famous Beale Street. Influenced by country, gospel, and blues among other styles, Elvis recorded his first song in 1953 with Sun Records. It took multiple recordings and several rejections before one of Elvis’ songs hits the radio waves.

In July of 1954, Elvis and several musicians were nearing the end of a frustrating recording session when he began to play an old blues number, just for fun. The Sun Records exec recorded the spontaneous session, and three days later it was picked up by a popular Memphis DJ, Dewey Phillips. Shortly after that, he signed with RCA Records and released “Heartbreak Hotel” in 1956. Twelve weeks later, it became a number-one hit in the U.S. He would perform his infamous rendition of “Hound Dog” on the Milton Berle Show in June of that year. From there, Elvis’ career took off, and “The King” had arrived.

In an interview in August 1956, Elvis talked about his stuttering: “Whenever I get excited, I stutter a little bit. I have a hard time saying ‘when’ or ‘where’ or any words that start with ‘w’ or ‘i.’”  In fact, evidence of Presley stuttering as an adult can be heard on recordings from The Louisiana Hayride when Presley was launching his career, according to Examiner.com. On the recordings, Elvis can be heard stuttering when he talks to the audience in between songs. After he stutters, he stops himself, pauses and then begins again, changing the words slightly. Here, he can be heard stuttering when he introduces the song “Maybellene.”

Today, Elvis is still the best-selling solo artist in the history of recorded music. He had a dream to become a successful performer and entertainer, and he didn’t let his stuttering or any other struggle stand in his way. As Examiner.com noted, “People struggling with stammering issues can find inspiration in knowing that they share something deeply personal with one of the most successful singers of all time.”