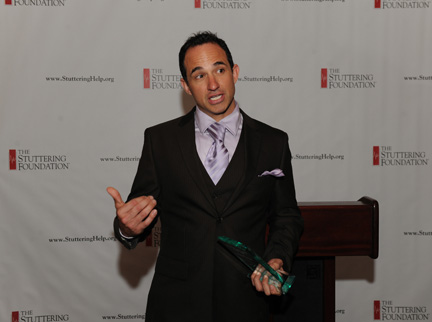 New York (May 8, 2012) — Author, actor, and playwright Scott Damian was honored by the Stuttering Foundation at a May 8th gala in New York to celebrate National Stuttering Awareness Week and the Foundation’s 65th Anniversary as the world’s leading charitable organization helping those who stutter.

“In his book V-V-Voice: A Stutterer’s Odyssey, Scott explores his own personal struggles with stuttering while reminding us through his multitalented career how those obstacles can be overcome,” said Jane Fraser, president of the Stuttering Foundation. “He is an inspiration.”

Fraser presented Damian with the Foundation’s “Converting Awareness into Action” Award for the hope and inspiration he brings to the stuttering community.