Editor’s Note:  The author is a person who stutters. For many years he has been a collector of “stuttering” songs – the good and the bad! 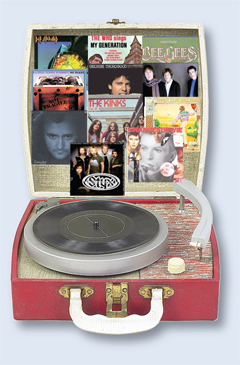 We all know that there have been numerous songs of the rock era that feature stuttering vocals. Evany Thomas posted a list on the internet entitled “The Top Ten Stuttering Songs.” The list includes Foolin’ by Def Lepard, My Generation by The Who, Changes by David Bowie, Jive Talkin’ by The Bee Gees, My Sharona by The Knack, You Ain’t Seen Nothing Yet by Bachman-Turner Overdrive, Bad to the Bone by George Thorogood, Benny and the Jets by Elton John, Sussido by Phil Collins and Lola by The Kinks. This list seems accurate, though a couple of other tunes are conspicuously absent such as Too Much Time on My Hands by Styx.

Of these songs, Bachman-Turner Overdrive’s You Ain’t Seen Nothing Yet is unique in more than one way. First, it ranks as the first song with stuttering vocals to reach the number one slot on the Billboard Hot 100, reaching that plateau in early November 1974. However, few realize the interesting story behind the song. The Canadian group was led by Randy Bachman, and featured his brothers Robbie and Tim, as well as Fred Turner. The band’s first manager was another Bachman brother, Gary.

The song was never intended to be released with stuttering vocals. Randy sang the stuttering vocals to poke fun at his brother Gary, who had recently stepped down as the band’s manager. It was done with the intention that it would be given to Gary and no one else. Randy Bachman once said of the situation, “He stuttered. We thought, just for fun…. We’d take this song and I’d stutter and we’d send it to him. He’ll have the only copy in the world of this song by BTO.”

However, their record company, Mercury Records, felt that their soon-to-be released album Not Fragile lacked a potential hit song and asked if the band had any leftover songs. Randy told the record executives, “We have this one song, but it’s a joke. I’m laughing at the end. I sang it on the first take. It’s sharp, it’s flat, I’m stuttering to do this thing for my brother.” He agreed to include the song on the album only if he could re-record the vocals. The record company hated the second version with the non-stuttering vocals and insisted that the stuttering version be released, much to the chagrin of Randy. It became the band’s only chart-topper.

Between 1974 and 1976, Bachman-Turner Overdrive had six songs enter the Top 40. They disbanded in 1977 and there have been a couple of minor reunion tours since. It is compelling that their former manager, the famous Gary Bachman, got on top of his stuttering through speech therapy and for many years has been a highly successful realtor in his hometown of Winnipeg, owning and operating Century 21 Bachman and Associates for 25 years.