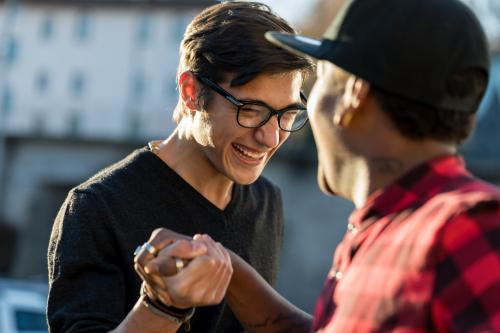 Peter, a child who stutters, is alone at recess. He sees classmates playing kickball and asks to play but only receives mocking and teasing in response. Peter leaves upset and heartbroken that no one will include him at school. He sits on the grass and watches silently.

Leslie, a teenage girl who stutters, has a huge desire to audition for the school play. She loves the idea of being on stage and nervously walks to the drama teacher's classroom but when the teacher acknowledges her, Leslie quickly walks away in fear.

Xavier, a college graduate who stutters, timidly shakes hands with a prospective employer. As they sit down to talk, Xavier sees the all too familiar brew of puzzlement on the interviewer's face and the sudden shock of a stuttering potential employee. After the interview Tim leaves with the unresolved question if stuttering cost him the job.

Valerie, a mother who stutters, just moved to a different neighborhood and has two little children. She attends mommy and children events but is having a hard time introducing herself to the other moms and feels dejected when they don't respond to her.

All these individuals are made up but the struggles of people who stutter are real. They have dreams of being accepted by their classmates, participating in extracurricular activities, securing employment and being included in their community. Who can bring awareness of stuttering to their neighborhood? YOU. You can extend a friendly smile, start a nonjudgmental conversation and change someone's life. YOU are the answer.