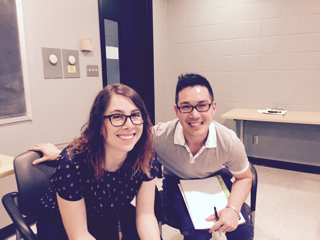 University of Iowa Summer Program to Educate Adolescents and Kids who Stutter (UISPEAKS), Iowa City: This year’s summer (or my winter in New Zealand!) began with a bang when I observed Dr. Tricia Zebrowski and her team run the weeklong residential program for teenagers who stutter at the Wendell Johnson Speech and Hearing Clinic at the University of Iowa. This unique experience demonstrated the importance of individualising stuttering therapy, as opposed to sticking to a strict therapeutic program where all participants were expected to work on the same goals. Fifteen courageous teenagers, half of whom were “newbies” and the other half who had attended UISPEAKS in previous years, worked tirelessly on discovering what stuttering meant to them and what THEY wanted to do about it. I enjoyed the emphasis on the teen being the “expert” of his or her stuttering and the teen (not the clinician!) deciding on what strategy worked best for them.

For some teens, “strategies” included motor training, where intensive practice of new fluency skills or stuttering modification skills took place. For others, there was more of a focus on investigating what other people’s perceptions of stuttering, rehearsing and practising self-advocacy skills and reducing fear and avoidance by being more open about stuttering. An overarching goal for the week was starting the process of helping the teen say what they wanted to say despite stuttering.

The aspect I enjoyed the most from a SLP’s perspective was the notion of talking and paying attention to how we talk was reinforced throughout the week. The late Dr Dean Williams’ therapy approach was a constant throughout the week with Dr Zebrowski helping the teens pay attention and notice what they needed to do have forward moving speech.  The term “strategy” was discouraged as it was non-specific and it didn’t mean the same for everyone. The use of “doing” language and being responsible for change was reinforced time and time again. For the teens, changing behaviour became easier as they became more aware of what they did in a moment of stuttering rather than ‘blanking out’ or thinking “it just happened again”.

Of course, summer camp isn’t summer camp without the fun stuff. Some of the recreational activities included going out on the Lake McBride Boats, catching a movie and going bowling. There is even a camp tradition and friendly rivalry between Dr Zebrowski and the teens (YouTube UISPEAKS Camp 2015 and watch what happens around the 3 minute mark)!

All in all, UISPEAKS was an extremely rewarding experience for all involved and it has inspired me to do set up something similar in New Zealand. I would like to take the time to thank the following people for allowing me to make this happen: firstly, Dr Zebrowski for providing me with the opportunity to be a part of UISPEAKS 2015; her team: Bryan Brown, Lee Caggiano, Julie Gasway, Hope Gerlach, Naomi Hertsberg and Evan Totty for being so welcoming and looking after me; all of the University of Iowa student SLPs for involving me in some of the teens’ individual sessions; camp counsellors Jill and Erin for keeping the teens happy and well looked after; my workplace in New Zealand for supporting my trip to Iowa City; and last but not least the campers for being the best teachers in the world!

Have a wonderful summer everyone and until next time,

SLPs: For more information on Dean Williams’ work, the Stuttering Foundation has a book and DVD available to order from its online catalogue –

“The Genius of Dean Williams” - Book