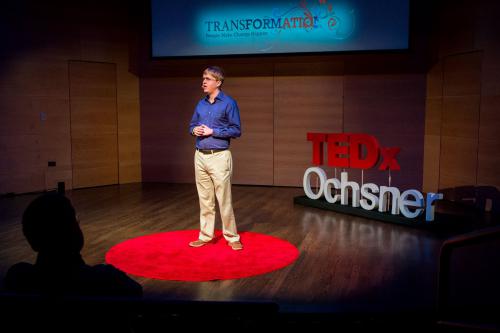 Since June 2018, giving a talk on a TED stage has been on my bucket list. It’s a goal I never thought I would have the ability to accomplish because I thought I wasn’t qualified to stand on that stage. Whenever I considered filling out the application, self-doubt would tell me to close the application and move on to something else. I listened to that self-doubt every day up until mid-March of 2019. I received an email saying my company was hosting their first TEDx event. My first thought was, “Holy shnikes! I have to apply for this.” However, self-doubt quickly responded, “What do you have worth saying? You probably won’t be picked, so why bother?”

I listened to that self-doubt for a few days, but quickly ignored it after a chance meeting with one of the people putting on the event. After giving him my elevator pitch, he liked my idea and encouraged me to apply. So, I did. After three rounds of interviews over a one-month span, I was one of the twelve speakers chosen. To say I was excited and surprised would be an understatement. After every interview, I thought, “That wasn’t my best. I probably won’t move on, but that’s ok. At least I can say I tried and failed as opposed to not trying and not knowing what could’ve been.”

The week between finding out I was chosen and beginning our workshop was intense. I was trying to balance getting my talk ready, studying for my certification exam for work, and preparing my presentation for the NSA conference. On top of all of this, I was busy trying to convince myself that I was picked for my idea and not because my stutter would add some “diversity” to the event.

On the first day of the workshop, I arrived early because that’s my M.O. when going to a new place and/or going to an important event. This was both. Once all twelve of us arrived, we had to do everyone’s favorite activity: go around the room and introduce ourselves. As I usually do during these things, I was barely listening to what the other members were saying. Instead I was thinking of how to say what I want to say. Typically, this means, I think about what I can say that will allow me to answer the questions and cause me to stutter the least. This time was different. I was thinking about the best way to disclose my stutter to the group. When it was my turn I said, “I’m James and I stutter. Feel free to ask me any questions about it. All I ask is that you don’t finish my sentences and maintain eye contact with me when I stutter. Now that that’s out of the way…” I then proceeded to answer the questions. Looking back, I can honestly this was my most confident and enthusiastic disclosure. I think it was due to my excitement about being there. Disclosing my stutter use to be rare and something I did only when I had to, but now it is becoming more common. I think that is another indicator that I’ve accepted and embraced my stutter.

After introductions and icebreakers were finished, my good friend self-doubt slowly re-appeared. I had to re-work my original opening in an effort to fit certain criteria. From there, I felt as if it was all going downhill. We spent all afternoon workshopping our talks and going over them with our coaches. The more I worked on it, the more I grew to not like my talk. I didn’t feel that the talk was working nor did I feel like I deserved to be there. I spent so much time trying to make my talk meet the guidelines that I lost sight of what was important: my idea and my voice. I went home full of self-doubt, second guesses, and more questions than answers in my abilities.

I returned the next morning and my friends self-doubt and second guessing came with me. After talking to some of the other speakers, I realized that I was not the only one with some doubt. It was comforting knowing that I was not alone. It was after these conversations that my talk came to me. My friends self-doubt and second guessing hit the road and I got lost in the writing process. While being lost, I found the best way to present my talk in a way that displayed me and my idea.

The morning of day 2 is when things started to get real. We went to an auditorium to get the feeling of presenting on stage while standing on THE red dot. I’ve done many presentations but standing on a red piece of carpet on an otherwise empty stage is a whole new ball game. I presented my opening paragraph to the coaches and fellow speakers and received positive feedback. Not too shabby for an opening I had written a couple hours prior. The rest of the day was spent going through additional workshopping and coaching sessions. Unlike the day before, the more I workshopped the more I liked my talk. By the end of the day, I felt confident in my talk. I was starting to feel that I deserved to be there and that I was there for my idea and not my stutter.

In between the workshop and the event, I received coaching from one of our TEDx coaches. I gave her my presentation and she told me that it was great and I should not change a thing. It was great to hear and validated to me that I deserved to be one of the twelve speakers.

After my coaching session, the weeks leading up to the big day were a blend of nerves, excitement, and slight terror. I was swinging from feelings of “I got this” to “I’m terrified” as quickly as (spoiler alert) Rob C swung from alliance to alliance in Survivor: Amazon. Factor in the other major commitments I previously mentioned and on more than one occasion I felt as if I was about to have a nervous breakdown. During my near breakdowns, I would take deep breathes and try to convince myself that I do in fact, “got this.”

The big day, June 12, was here before I knew it and I can honestly say it was one of the most memorable, exhilarating, and nerve-wracking days I have had in a while. I was scheduled to give my talk directly before lunch, so needless to say I was a bundle of nerves the entire morning. I was using every trick and tip I had to calm myself down, but they were of no use. Once I got backstage and mic’d up, my nerves, excitement, and terror skyrocketed. I was pacing around the backstage area. I used relaxation techniques that I hadn’t used in four years in an attempt to decrease my nerves, but nothing worked. After one of the longest hours of my life, it was my time to stand on the red dot and give my TEDx talk to my colleagues.

I stepped on the dot, took a deep breath, and told myself, “This will come out the way it will come out and that’s OK.” Over the next four and a half minutes I stuttered big time, but more importantly I delivered my TEDx talk and gave my audience my message. Once it was done, I went backstage to celebrate what I just did with my fellow speakers and the backstage crew. During this celebration, I was overcome by a wave of emotion and I had to take a few minutes for myself. I kept thinking of the James from five years ago, who would have let his stutter hold him back from even putting a TED talk on his bucket, much less giving a TED talk. That James would’ve been mad and embarrassed that he stuttered that openly to a group of strangers. The James from five years ago would not have believed that 26-year-old James accomplished this. At 26, I’m proud that I stuttered openly, and I celebrated and am celebrating this event.

Thank you to all who had a hand in making TEDxOchsner the massive success that it was. To my fellow speakers, it was an honor and privilege to share this journey and the stage with y’all.