"My Fears Drifted Away" 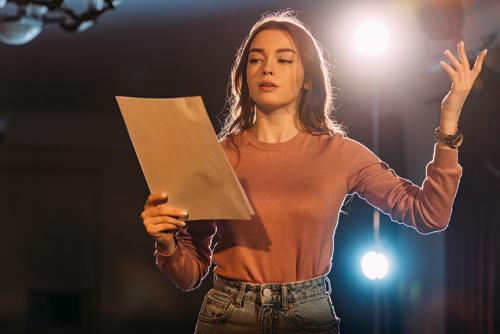 I never thought as a person who stutters I would voluntarily take multiple improv classes and perform in front of groups of strangers.

Talking in front of a large group of people—especially people I didn't know and had never met before—more often than not brought up feelings of dread rather than excitement.  So, when a friend asked me if I wanted to go to a drop-in improv class in spring of 2015, I tentatively agreed. What did I have to lose—other than my confidence?

To say I was nervous during that class and the ones that followed is an understatement. During one of the classes all of my improv classmates stood in a line and one by one everyone would step forward and start a new scene. The improv instructor would end the scene at the appropriate time or offer constructive critiques, and then someone new would be welcome to step forward and create a new practice scene.

Since each person had to step forward, I finally felt that it was my turn to do so. I stepped forward and the fear of stuttering drifted away as I listened to what my scene partner said, and how best I could respond to it. We continued to agree and “yes, and” each other—and then I heard it. Laughter. My classmates were laughing. However, this kind of laugh wasn't a harsh laugh I'd experienced in the past when people would laugh at my stutter. Instead, this laughter was over something we had said that caused enjoyment. It was about the meaning of the statement, not the way it was presented.

As someone who stutters, I've learned to recognize the different kinds of laughter that exist. There is the cruel laugh, the one that people emit when they make fun of someone else and intend to bring the other person pain. There is the awkward laugh to try and diffuse a situation. Then there is the laugh that is genuine—the one that is in your favor. Because improv encourages people to work together, it was reassuring to hear strangers laugh in a genuine way.

The more I attended these classes, the more my fears drifted away.

That elation cemented my newfound love of improv comedy, which was why I signed up for classes at a renowned comedy school in New York City. The most intense part? There was a show at the culmination of the eight classes where our friends, family, and random acquaintances and other students could attend.

Stepping forward to start a scene in an improv class in front of a dozen or so classmates was intimidating. It was even more intimidating to step forward in a room full of dozens of strangers sitting in the audience, watching the performance.

Improv comedy is extremely supportive. It's about mutual agreement about making each other look good. The more I talked through scenes and agreed with my scene partner and tried to find the pattern in our scenes and let go of all the worries about how I would sound, the more I enjoyed it. After all, as past instructors have mentioned during classes, listening is important and it's OK to take the time to start a scene. Likewise, it's OK to stutter and take the time to say what you want to say.

I went into the final show of my very first Improv 101 class pacing back and forth and trying to unravel the knots in my stomach. It was comforting knowing my improv classmates were as nervous as I was.

Once we got up on stage and the lights dimmed, the fear and nerves were still there, but I also felt a deep inner calm. The scenes continued, people laughed good-naturedly, and my classmates were supportive.

The audience burst into applause after the show finished, and the elation of knowing I faced my fears and improvised scenes in front of an audience felt incredible.

While I do feel nervous about speaking in front of large crowds, it's not as intimidating as it once was. I never thought about trying to stand in front of a crowd of random strangers and make them laugh because I thought they would be laughing at me as opposed to with me.

Now, after taking a few years of improv classes, speaking in front of a large crowd with a stutter isn't as daunting anymore. And if I do stutter? It's OK. That's what improv is all about anyway—improvising and being supportive of each other.