The Importance of Finding The Stuttering Community 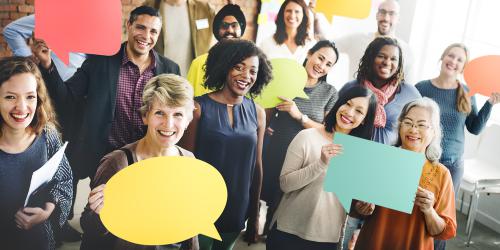 I'm a person who stutters and for most of my life I thought that meant living life in isolation. I thought no one else understood what it was like when words emerged distorted from my mouth, some with extra syllables and others with elongated vowels. I thought no one else knew what it was like to switch words internally before speaking their respective synonyms out loud. I thought I was the only one who repeated a word or phrase over and over again internally before ending up not saying anything at all in a conversation. I'd stand there, mind racing, yet everyone else could only view my silence. I've realized stuttering has transformed the way I wield words in the English language. I'm a potter who molds with a different kind of clay, who constructs sentences that are different from the norm, creating a speckled clay flower pot within a terra cotta garden.

Because I spoke at a much faster rate and also stuttered, well-meaning friends in middle school offered, as a joke, to act as my "translator" from my own language to the English language to people who weren't used to my manner of speaking. At the time, I understood that my friends meant well. It was just another aspect of who I was that they accepted. However, looking back, it felt isolating. Because, actually, I was speaking my own language.

I was speaking within the world of stuttering.

I live in the world of fluency and yet I am from the world of stuttering, a place most people don't understand. I've spoken in conversations and people have laughed in my face or snickered when they thought I wasn't paying attention. (I was.) I observed vacant expressions and hollowed eyes when people grew tired of listening.

I've been told to slow down when I stumble over words, as if I tripped over an exposed root while on a hike. They didn't understand that even though I'd heed that advice, it couldn't prevent blocks from forming, from the roots to emerge and trip me no matter what pace I walked.

Sometimes, in conversations, I couldn't navigate the bramble of my own thoughts, so I would say nothing instead of forcing myself through my stutter. I needed more time to speak, not to be told to slow down, which made me more self-conscious of speaking. I needed patience and understanding, not advice on learning how to speak.

For years, I ignored everything related to my stutter. I started writing about stuttering in my twenties to process what it actually felt like to stutter. By talking to people who stutter, I confronted the parts of myself I had been ashamed of and buried all those years ago. The more I wrote about stuttering, the more I became open about stuttering. I started to heal parts I thought couldn't be healed. I attended the Stuttering Foundation's Gala year after year, feeling at home among people in the stuttering community. I listened to the guests of honor and teared up at hearing their stories.

And yet, the more I learned about the stuttering community, the more I subconsciously held myself back. The more fluent I became, the more I'd tell myself I didn't belong. The more I wanted to learn about myself, the more I became afraid of what was still hidden. The fear of stuttering I'd harbored for so long had become a part of me. I finally came face to face with the fear, the heart of the matter: I was still, after all that time, deeply ashamed of my stutter. I was ashamed of who I was.

I disappeared once again within the fluent world. I didn’t realize I had marooned myself on my own island. There were no fires, no smoke signals, no attempts to create a vessel in which to escape my self-imposed doubt and isolation.

However, I couldn’t hide within the world of fluency forever. I needed to continue to understand my stutter and the deeper aspects of the submerged iceberg. This past July, I attended the National Stuttering Association’s annual conference in Chicago and there was something about being in a room full of hundreds of people who stutter that forever altered my way of life. It was overwhelming, in a good way. In a room full of people, we were told we didn't have to speak if we didn't wish to do so. When one person stuttered, everyone focused on that person. Everyone listened intently until they finished their train of thought. I'd never experienced that intensity in any other setting, be it in a classroom or a conference room. After that conference, I attended local NSA chapter meetings for the first time.

I realized that while I didn’t choose to have a stutter, I chose to surround myself with people who stutter. I chose to be in the stuttering community.

Perspectives and thoughts and mannerisms I considered to be my own weren't that unique after all. I am eternally grateful to have found people who stutter and who continue to be so intimate with the personal details of their lives. I have found relief in knowing that I am not alone, and I will not be alone again.

I've been wavering between the stuttering world and the world of fluency for far too long and I finally decided to merge the two.

After knowing and glimpsing the compassion, love and understanding within the stuttering community, I can't go back to being on my own island, isolated from the community who has welcomed me so warmly. Now that I have jumped into the unknown, there is no turning back. I am sinking deeper into the depths of who I am as a person who stutters and the great depths of the stuttering iceberg.

Though it often felt like it growing up, I was never truly alone. I was only as alone as I chose to be. The people I've met on my stuttering journey have become hugely inspirational in my life. I love hearing their stories and talking about stuttering and the everyday aspects of our lives. In a way, I can't believe the community, this group of smart, compassionate, witty, introspective, loving people has been there this entire time. It took a long time to realize that the stuttering community was always there, waiting to be discovered.