How Accepting My Stutter Made Me More Genuine 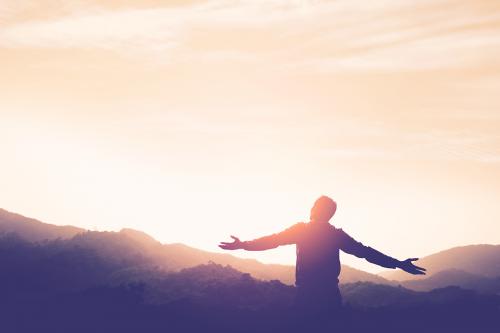 “I want you to stand out. I want all of you, to be as different as you can possibly be, in all the best ways.”
- Jack Pearson (This Is Us)

The above quote is from the seventh episode of one of my favorite TV shows, This Is Us. Inthis scene, Jack Pearson (Milo Ventimiglia) is talking to his adopted ten-year-old son, Randall (Lonnie Chavis), about owning our differences and being all that we can be. In the episode, Randall hid his intelligence as a means of fitting in with his siblings and classmates. While re-watching the season, this quote stood out to me because it helps describe my journey with stuttering.

When I started college, my stutter had just recently returned after a six-year hiatus. Eighteen-year-old me was nervous about bringing this friend from home with me to college because I didn’t know how people would react. Because of this, I focused all of my time on extracurricular actives and studying. I wanted to be known as James who excels in academics, James who is heavily involved in the Catholic Student Association, or James the forensics major, not James the stutterer. Being involved in numerous activities and excelling academically, people didn’t know me by my stutter and I was ok with that. Looking back, I immersed myself in my school work and extracurricular activities because I was nowhere near ready to accept and own the fact that I stutter to others, much less myself. Yet, the constant desire to be known for anything but my stutter caused me to bury my emotions on stuttering and in turn everything else. Or maybe it was the other way around. Either way, I harbored a lot of pent up emotions about stuttering and life that didn’t come out until I was in speech therapy hashing this out.

People knew I stuttered because I openly stuttered; however, I never openly talked about it.  And if we are being truly honest, I did not openly stutter all the time. Far too many times, I pretended I didn’t know the name of my apartment complex and in order to tell someone where it was I described the businesses around it. I pretended I didn’t know the name of the city my college was in. These two places, Hillendale and Hattiesburg, begin with the letter “H”, a letter I have a hard time saying. I did this not because I was unaware of what they were called, but rather I was embarrassed of my stutter and didn’t want to show the person I was talking to that side of me. I did my best to hide my difference. I wanted to stand out for anything other than stuttering. As a result, I wasn’t my true self.

When prideful twenty-year old me re-entered speech therapy in the fall of 2013, I didn’t know what was in store for me. What I did know is that no one could know that I was back in speech therapy.  For years I had put on the mask of being ok with stuttering, when in reality, the face behind the mask wasn’t ok with his stutter. I couldn’t let people know the mask was there and I had to do it by any means necessary. Once again, I was doing my best to not stand out and hide my biggest difference. This trend continued for the better part of a year.

The few times I did tell someone I was in speech therapy it was said with a degree of shame and embarrassment. As if the world would end and everyone would think less of me. I felt that by telling people this fun fact about me I would be indirectly telling people that I’ve been wearing a mask for years. When I told someone my dirty little secret I made him/her promise they would not tell anyone else. Yet again, I was doing my best to not be my true self.

I spent two years in speech therapy and during that time my true self started to come out. Yes, I learned and re-learned techniques to reduce my stutter, but more importantly I started to accept my stutter. I allowed myself to talk out my thoughts and emotions about stuttering with my speech therapists and in turn started to talk about my thoughts and express my emotions on things that had nothing to do with stuttering. However, I kept most of those conversations confined to the four walls of the therapy room. I was not fully ready to talk about my thoughts on stuttering or anything else with others. The few times I did have these conversations it was with the closest of close friends.

As those two years came to end, my time in college did as well. I was now in this scary place called “post grad life” and now thrust into the “real world.” A few months after graduating, I moved to a new city for a job. It was in that city that I first went to my stuttering support group meeting. I had known about these meetings for years, but I used every excuse in the book to convince myself to not go. In my new city I looked up the support group and saw there was a chapter that met at the local library, which happened to be less than five minutes from apartment. I decided to go as a means of meeting new people, seeing what this whole support group thing was all about, but mainly to see if “acceptance” was a real thing.

You see, by the end of my two years of speech therapy I had a sense of self-acceptance with my stutter. I remember walking through the doors of the library that cool October night having a desire to see if my acceptance was real. Although I had a sense of self-acceptance, I still wasn’t ready to accept it with others. I had no idea where in the library the meeting was, and I was not about to ask someone. I almost left the library and vowed to try again next month because of my lack of acceptance with others. I didn’t only because I saw two college aged students in scrubs who I figured they were SLP students and I followed them to the meeting. I walked into that meeting with no idea what to expect and thought this would be both my first and last support group meeting. Boy, was I wrong. I walked out of that meeting knowing that my self-acceptance was real. My next step was to be able to accept it with others. Slowly, I was beginning to embrace my biggest difference.

Over the next three years, I was able to further accept my stutter with myself and also with others. The first way I accepted my stutter with others is by wearing stuttering related clothes. I went from being mad at receiving an “iStutter” pin to wearing that pin and stuttering related t-shirts on a somewhat frequent basis. Another way is on social media. I went from only “liking” stuttering related articles on Facebook at 1:00am in hopes of few people seeing it to now regularly sharing them. My biggest way is by writing about my journey with stuttering. A few years ago, stuttering was something I talked about with the closest of close friends. Now, I write about it and share my journey and experiences with the world. My writing has made me ask myself, “Why do/did I do this?” and, “Why do/did I think this certain way?” These questions cause me to be honest with myself. In turn, I am more genuine with others. My stutter has caused me to be the most honest version of myself and I no longer hide my difference. I stand out and am my true self, stutter and all.