The Good in the Midst of COVID 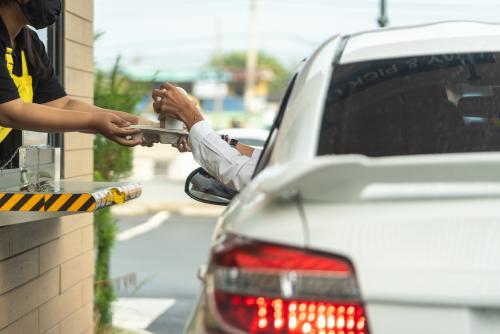 I think most, if not all of us, would agree that 2020 has not been a good year. I know it wasn’t for me. In fact, I struggled mightily at the beginning of lockdown. Over the past few months, I’ve gotten used to my new routine and this sense of “adjusted normalcy,” but I still don’t like it.  Yet, when I take a step back and look at 2020 macroscopically, I can find good in it, because of three ways in which I further accepted and embraced my stutter.

I’ve been going to monthly stuttering support group meetings for a little over five years. At nearly every meeting, I would say something along the lines of, “I want to get better and more comfortable at ordering through a drive-thru.” The leader would say, “Ok. Do it.” I would return every month with some non-sensical excuse as to why I didn’t order at a drive-thru since last time. This process repeated itself for four years and two different stuttering support group chapters, even as I became the leader of the second chapter. When a member in my chapter challenged me to order at a drive-thru I knew I couldn’t let them down, so I did it. And I’m glad I did because it gave me the confidence boost that I didn’t know I would need.

Typically, I order inside the restaurant, regardless of where I’m going to eat my meal. I usually have a complicated order and this way I can point to the menu item if I’m on a severe block. The reality is I don’t want to experience a stuttering moment and hear the employee tell me, “Sir, our system is breaking up. Can you repeat that,” or “Sir, we can’t understand you. Can you pull up to the window and order?” It’s never happened, but I didn’t want that fear to become a reality. As a result of the pandemic, the safety blanket I found inside restaurants was now gone. I had to face a drive-thru if I wanted fast food. I have used a drive-thru only a handful of times in my ten plus years of having a driver’s license and having that experience a few months pre-pandemic did ease my nerves a bit. I knew I could do it, even if I didn’t like it. The first time I used a drive-thru was a few weeks into the pandemic. I experienced a few minor stuttering moments, but it was a non-issue and my order was right. This further boosted my confidence. Over the past nine months, I’ve used a drive-thru more than I have in the past ten years. My experiences and fluency have varied, but I know I can do it. I don’t need my safety blanket anymore. Ordering via a drive-thru is no longer on my list of things I avoid because I stutter.

Only within the past couple years have I become comfortable disclosing to others that I’m a person who stutters (PWS). My logic for not previously disclosing was, “If you talk to me long enough, then you’ll figure it out.” If I’m being honest, I think my main reason for not disclosing was because I wasn’t comfortable with nor wanted to acknowledge this part of myself. Now, I disclose rather quickly when I meet a new coworker or someone I’ll see often. Disclosing in person is one thing but disclosing to strangers over the internet is a whole new ball game. It’s something I never thought I would have to do, yet it’s something I’m glad I’ve done.

Over the summer, I played in an online game based off of the hit CBS show Survivor. Knowing I’d be video calling my fellow contestants often, I decided to disclose to my tribemates within minutes of the game starting. I did this so they would know I wasn’t having internet issues, know what was going on when I talked, and would know that in a game of lying and deception that my stuttering did not equate to untruthfulness. I also did this to further grow in my journey of acceptance. They were glad I told them and it had no negative impact on my game, as it should be. Through that game I met a slew of other people in the online Survivor community. This led to some of us having weekly game nights and more disclosure to a new group of people.

A few hours before our first game night, I disclosed and provided links to what stuttering is and explained how to best respond to my stuttering moments. I also told them not to hesitate asking me any questions about stuttering.  We typically play “Secret Hitler,” another game built on lies and deception. Because I disclosed, they knew to not buy into the stereotype of equating lying with stuttering. I know that when they accuse me of being “sketch” or “sus” it’s because of move I made or a comment I said and not the way that comment was said.

I’ve done a two more online Survivor games since the first game ended and have disclosed each time. I now spend more time thinking about when to disclose then if/how I should disclose. That’s a massive improvement from where I was a couple years ago.

I’ve always hated watching myself stutter. It’s awkward, uncomfortable, and embarrassing. I thought I’m uncomfortable with this, then what does my audience think? Since April I’ve had to watch myself stutter a good bit because of the many Zoom and Skype calls I’ve been on. At times I considered turning my camera off so neither the audience nor myself would be forced to sit through that discomfort. Yet, that changed during my online Survivor game. A big component of the game was appearing on camera to give confessionals, talk to your tribemates and allies all over the world, and vote people out. I was apprehensive about stuttering on camera to people I had just met; however, the appeal of figuratively donning a Survivor buff and playing this game outweighed those concerns. Although my tribemates knew I was a PWS, I was nervous before that first Skype call.   I was worried about how they would react to seeing how ugly stuttering can sometimes look. Fortunately, they didn’t care about my stutter nor seemed uncomfortable during my intense stuttering moments. As the game progressed, I became more comfortable with the uncomfortable.  It got to the point where the only thing I was uncomfortable with was how overconfident I was in my confessionals.

Since the game ended in August, I’ve been on many Zoom and Skype calls and never once was I uncomfortable or wanted to turn off my camera. I also had the opportunity to present at a virtual stuttering conference in October. I think playing that game gave me the confidence needed to present at the conference.  Even though my audience consisted of speech language pathologists and other PWS, I don’t think I would’ve done it if I was still uncomfortable with watching myself stutter.

The lockdown wasn’t good and the pandemic is terrible, but it has provided some small good in my life. 2020 won’t go down as my favorite year, but I will view it as one of the most influential years on my journey with stuttering.