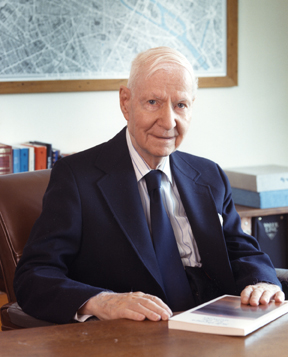 Malcolm H. Fraser — whose personal commitment and entrepreneurial spirit enabled him to begin a second career in mid-life as founder and driving force behind the Stuttering Foundation — passed away peacefully in his Memphis home on February 17, 1994.

“I know Malcolm would ask us not to mourn his death, but to rejoice in his life,” eulogized Wilton Looney of NAPA – Genuine Parts Company. He spoke at a memorial service that was filled with friends of Dr. Fraser who traveled from several states and abroad recently to pay their last tribute.

Indeed, Malcolm Fraser spent his entire business life with Genuine Parts Company and contributed as much as any one individual to its phenomenal success. He was quickly recognized as someone who could help others get the best out of themselves. “I hesitate to guess how many lives he touched,” remembers Looney. “By training people to work . . . how to be successful . . . simply put, he was a builder of people.

But Malcolm Fraser wanted more. As his long-time business associates remember, “He had a passion to help others be successful.” All his life, Fraser had been afflicted with a speaking disorder—stuttering. He knew from personal experience what a person who stutters is up against. So, at an age when many would have thought of enjoying a lifestyle of comfort and self-indulgence, Malcolm Fraser chose another path. At the age of 44 years, he founded the Stuttering Foundation in 1947.

Under the determined guidance of Malcolm Fraser, there would never be any doubt about the Foundation’s success. To date, this non-profit charitable organization has published and provided millions of books, brochures, DVDs and other highly-regarded educational materials for professionals and the general public alike. Others took note, and the American Speech-Language-Hearing Association granted its Distinguished Service Award to Malcolm Fraser and the Stuttering Foundation in recognition of “its dedication and effective contributions to the field of speech pathology.”

Malcolm Fraser’s Foundation also has sponsored more than a hundred educational conferences on stuttering that have attracted the world’s foremost authorities in the field. “‘Gentlemen, let’s be practical’ was a frequent Fraser admonition at these week-long, intensive seminars,” remembers Dr. Harold Luper of the University of Tennessee. “Malcolm had a unique ability to bring us back on course when our academic musings went afield and to remind us of our central objective: helping those who seek relief from the burden of stuttering.”

It was also Fraser’s idea to develop a nationwide network of speech pathologists and therapists who are specialists in stuttering. “At first, Malcolm’s idea met with some resistance,” recalls Dr. Hugo Gregory of Northwestern University, who also practiced in the science. “But, as usual, he was right, and his conferences have been instrumental in training specialists nationwide—yet another of his lasting legacies.”

Malcolm Fraser’s seminal book, Self-Therapy for the Stutterer, has been internationally acclaimed by academics and lay people alike since its original publication. Now in its eleventh edition, it has reached millions of individuals. Dr. Fraser’s sound and plain spoken counsel to stutterers also has been read in countries around the world and translated into 25 languages, including French, German, Japanese, Flemish, Persian, Lithuanian, and even Swahili.

In more recent years, Malcolm Fraser turned to his daughter, Jane Fraser, to assume the presidency of the Stuttering Foundation and to carry forward his vision. Malcolm Fraser remained an active and deeply interested founder, however, and continued to provide both financial and intellectual support throughout his life. In 1989, the Hamilton College awarded Malcolm Fraser an honorary Doctor of Humane Letters degree for outstanding work on behalf of those who stutter.

“There are few in life who are as determined to apply a no-nonsense, businesslike mind to the cause of helping others,” says long-time friend and SFA Board member Jimmy Garrison who conducted the service. “Stuttering didn’t prevent him from realizing his dreams; in a sense, it liberated him. It opened the doors to a fruitful career that has touched millions, and he has left a legacy—the work of the Stuttering Foundation—that will keep his mission and goals alive in perpetuity.”

Malcolm Fraser: How One Person Made A Difference — download the PDF