Review of the King's Speech 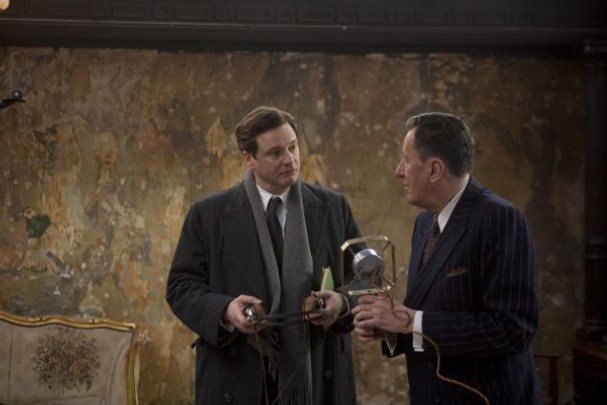 I was very slow to see the movie The King's Speech. I had wanted to see it for many months after I read my first review in late 2010. I am overjoyed with having seen it. It is a movie I will watch many times. I enjoyed it that much.

As I watched the movie, I drew many parallels between the sometimes despicable ways speech therapists and others treated the future King and me.

The King's Speech is the story of British King George VI (formerly Prince Albert Frederick Arthur George, Duke of York) and his personal struggle to control his stuttering or as the king calls it 'stammering.' For Albert dealing with stammering is a constant struggle internally, physically, psychologically and socially. For some stutterers, stuttering can impact their sexuality. Throughout the movie, actor Colin Firth, who plays the future king, reveals the internal, physical, psychological and social hurdles people who stutter face daily. Cullen's stuttering is so authentic that I almost believed he stutters in his personal life. Many times during the movie you experience the king's anger, pain, humiliation and self doubts about his abilities and manhood as he stutters. You can feel the alienation between the father King George V (Michael Gambon) and the future king when King George V expresses his anger over his son's stuttering.

"Relax. Relax," King George V shouts at his son. Albert sits silently unable to respond. Tears are rolling down his cheeks. A situation I have been in hundreds of times.

In a quarreling scene with his brother King Edward VIII (Guy Pierce), Albert shows the hurdles his stuttering poses when he is unable to respond verbally to his brother's mockery of his stuttering. In this scene, Albert shows tears, pain and humiliation. I sympathized with Albert in this situation because I experienced such situations in my younger years. It took a while to forget them.

There are many lessons regarding stammering to learn from this movie. One is as Albert's speech therapist, Lionel Logue (Geoffrey Rush) points out, 'no one is born stammering.' A second lesson is stammering cannot be cured. A third is no one therapy dominates the field. A fourth is stuttering usually begins around four or five years old. A fifth is stuttering may be caused by a terrifying incident such as being forced to change from being left handed to right handedness. Albert tells his speech therapist that he was forced to change from being left handed to being right handed when he was around four or five. This was about the time he started stuttering.

I started stuttering when I was almost eight after a traumatic experience with my second grade teacher who for months wanted me to change from writing with my left hand to writing right handed. After months of fruitless efforts, one day she repeatedly pounded my left wrist and knuckles with a steel ruler until my hand and knuckles started bleeding. Psychologists and speech therapists attribute this incident with the onset of my stuttering.

Another lesson is anger can produce fluency for someone who stutters. Albert is nearly always fluent when he is angry and cursing. So am I.

The King's Speech shows a number of nonsensical therapies to assist Albert control stuttering. For example, a doctor gives Albert some steel balls to put in his mouth and speak. This venture fails and convinces Albert that he will never be fluent. I had several speech therapists who suggested that I put a pebble(s) in my mouth and speak. This therapy technique was not successful.

As a way to gain fluency, Albert was asked to sing while speaking. I was too. This is an abnormal way of speaking and draws attention to the stutter's speech.

This movie is also about love, friendship and faith. Albert's wife Elizabeth (Helena Bonham Carter) will not give up trying to find a speech therapist who can help him. She finds Lionel Logue and she persuades Albert to visit him. She has faith in Albert that he can control his stuttering and be king.

Logue is certain that he can help Albert and is relentless in pushing Albert to his limits. The two men develop a lasting friendship when they realize how important they are to one another, especially Albert who realizes that Logue's methods are producing moments of fluency.

The King's Speech is also about Albert's ability to rally a nation to take it to war. King George VI's first major test of leadership rests on his speech to the world, via radio, telling listeners why England must go to war. Past experiences standing in front of a microphone resulted in Albert developing an irrational defeatist fear about speaking before one. Albert's fear is he will stutter so severely that no one will listen to him, and therefore he will fail. If he fails England fails. As king, Albert delivers a nearly flawless speech. Afterwards, Albert is brimming with confidence. He is a changed man. He has conquered his nemesis. He is a leader. A true king.

The movie, I am delighted to mention, is also devoid of sex, violence and explosive after explosive special effects. Despite some cursing, The King's Speech is a family movie!