Interaction of Both Sides of the Brain in Adults Who Stutter

Fluent speech primarily involves the left half of the brain, also called the left hemisphere (Brown et al., 2005; Fox et al., 1996). Ever since the 1920s, disturbed lateralization of brain function, i.e. an abnormal involvement of the right hemisphere, has been regarded as a possible cause of stuttering (Travis, 1978). In support of this, studies in the 1960s suggested that hearing is not as left lateralized in adults who stutter as it is in fluent speaking individuals (Curry and Gregory, 1969). In the last 15 years, brain imaging studies have further supported this assumption by showing that in stuttering, the left and right brain hemispheres do not share the burden of speaking properly. These imaging studies indicate a shift of speech related brain activity to the right hemisphere in adults who stutter (Brown et al., 2005; Fox et al., 1996).

In trying to better understand what is behind this abnormal lateralization of brain functions in adults who stutter and how it contributes to stuttering, we recently performed a study on interhemispheric inhibition (IHI). This is a measure of how one hemisphere’s motor cortex influences and inhibits the activity in the motor cortex of the other hemisphere. Such an inhibition was first observed in the area of the motor cortex where hand movements are generated. Unilateral hand movements, such as in sports or playing piano, require an inhibition of the other hand. This inhibition slowly matures and evolves during childhood. It is fascinating to observe how it takes years for children to learn how to, when manipulating toys or objects with one hand, suppress “mirror” movements of the other  hand.

This interaction between the motor cortex of one hemisphere with the motor cortex of the other can be studied in detail and with high time resolution using transcranial magnetic stimulation (TMS). TMS works by stimulating the motor cortex in one hemisphere  shortly before stimulating the motor cortex of the other. The result is that the  stimulus to the first motor cortex blocks off, or inhibits, the activity usually observed after the second stimulus is presented to the opposite motor cortex. Interestingly, this inhibition of one motor area by the opposite side’s motor area develops during childhood (Garvey et al., 2003; Heinen et al., 1998), and has been found to be abnormal in professional musicians who started playing a musical instrument in childhood (Ridding et al., 2000). Given that  abnormal right hemispheric brain activity has been shown in functional imaging studies of adults who stutter, it was tempting to conclude that the interaction of motor cortices may be abnormal. 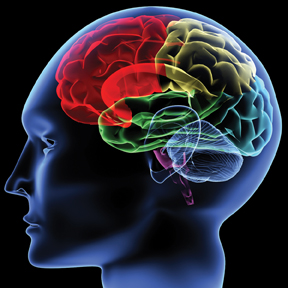 We therefore investigated 15 male subjects who have stuttered since childhood, with a mean age of 28.7 (standard deviation 10.6) years,  and 15 matched healthy control subjects with a mean age of 26.7 (standard deviation 4.6) years with no personal or family history of stuttering or cluttering. We found essentially no difference between groups with regard to interhemispheric inhibition (Sommer et al., 2009). This means that the suppression of the ongoing activity in one hemisphere by preceding activation of the opposite side’s motor area was perfectly normal in the group of adults who stutter. This indicates that the motor cortex itself is not the core site of the problem.

Rather, we believe that the inflows from other brain areas to the human motor cortex modulate its activity in a different fashion and are therefore subject of ongoing studies we are conducting. This view is supported by more recent findings by Nicole Neef from our group. She studied the fine tuning of the balance between inhibition and facilitation within the motor cortex and found an abnormal balance with a reduced facilitation (Neef et al., 2011). This suggests abnormal input to the motor cortex, e.g. from the basal ganglia.

In summary, our data show that the motor cortex itself and the interaction of both hemispheres is intact in adults who stutter, and direct future research to the interconnected areas influencing the activity of the motor areas of the brain.