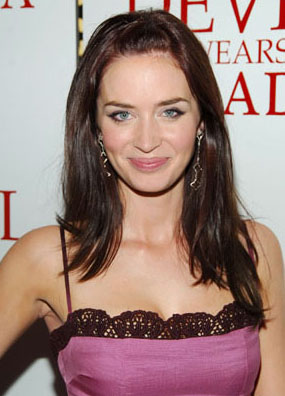 In the final week of March 2009, the public at large may have been surprised to learn that actress Emily Blunt struggled with stuttering early in her life when an article from the newswire circulated around the world about how the actress is grateful to her teacher for encouraging her to act in a school play at age twelve despite her stuttering. Also, Blunt's March 25 appearance on the Ellen show in which she spent the first six minutes of the interview discussing her childhood stuttering received some coverage as well.

While Blunt's name is prominently featured on the SFA's list of Famous People Who Stutter, she is the only person on the list who comes to mind who has mentioned other famous people who stutter when speaking in public about her stuttering. An article on August 28, 2007, from England that went over the worldwide newswires stated that Blunt vehemently insisted that she was not the only Hollywood star to suffer from stuttering, Blunt said about her stuttering,  "I know many actors who have stutters. Bruce Willis has one. James Earl Jones, too."

Emily Blunt burst into the limelight with her brilliant performance in the 2006 movie The Devil Wears Prada, but had gained attention previously with My Summer of Love in 2004. Emily Blunt's journey to fame began in London on February 23, 1983 when she was born to barrister Oliver Blunt and her teacher mother, who herself had enjoyed an acting career on stage and television before marrying and having a family. Emily's uncle is Crispin Blunt, the well-known Conservative Member of Parliament. Blunt's early life was filled with many fun activities at which she excelled, such as singing, playing cello and horseback riding. However, Blunt never considered following in her mother's footsteps in acting because of her stuttering.

In the October 2008 issue of W magazine that featured a profile on Blunt, the article stated, "There's an unwritten rule that all beautiful actresses must claim to have been total geeks in high school, whether or not they genuinely were, but Emily Blunt makes a far more convincing case than most. While growing up in a posh suburb of London, Blunt developed a stutter so debilitating that she could barely hold a conversation, let alone elbow her way into the limelight." Blunt put forth in the article, "I was a smart kid, and had a lot to say, but I just couldn't say it. It would just haunt me. I never thought I'd be able to sit and talk to someone like I'm talking to you right now."

In the W article, Blunt went on to mention that a teacher recommended that she try acting. In March 2009, in an interview for a newswire article that made its way from England to all corners of the globe, Blunt expanded on the role of her teaching leading her both into acting and into a life of fluency at the same time. Blunt said in the article, "I did have a bad stuttering problem as a child. I'd try to push the words out, but it was frustrating. My parents took me to speech coaches and relaxation coaches. It didn't work. Then one of my teachers at school had a brilliant idea and said, 'Why don't you speak in an accent in our school play?' I distanced myself from me through this character, and it was so freeing that my stuttering stopped when I was onstage. It was really a miracle."

Later in that month, on March 25, Blunt appeared on the Ellen show and began the interview by talking at great length about her childhood stuttering with host Ellen DeGeneres. The topic of stuttering dominated the interview, with DeGeneres asking the question of what caused Blunt's stuttering; appropriately, Blunt answered "I don't know." They discussed the hardship that a young person who stutters goes through, and the host was genuinely fascinated about the phenomenon of a person who stutters being about to use a fake accent to speak fluently. This interview received coverage on the entertainment shows. Of course, Ellen DeGeneres' interview with Emily Blunt can be viewed on YouTube.

Blunt was on the Ellen show to promote her new movie Sunshine Cleaning. Her next movie to be released will be The Young Victoria in which she plays a young Queen Victoria. There is little doubt that Emily Blunt, who won a Golden Globe award in 2007 for the mini-series Gideon's Daughter, will be prominent in the worldwide entertainment scene for many years to come. While Blunt will definitely have more high-profile roles in the future, the stuttering community hopes she will continue to give more high-profile attention to stuttering by being so candid in interviews and putting a human face on the speech disorder.