A Third Generation view of the King 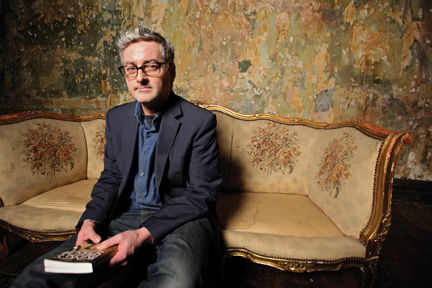 For decades, Lionel Logue’s name was an obscure footnote in biographies of British King George VI.

But thanks to his grandson and a blockbuster movie, he’s quickly become the most famous speech therapist in history.

Mark Logue, with the help of journalist Peter Conradi, tells the story of how his grandfather improved the monarch’s fluency in a recently published book, The King’s Speech.

Tom Hooper and David Seidler, the director and writer of the award-winning movie by the same name, consulted with Mark Logue. “Tom Hooper was incredibly diligent in getting as much of the facts as possible into the film,” says Logue.

As is usually the case, the movie takes a few liberties with the facts in the book, though Logue, 45, says he doesn’t mind. For example, the first encounter between the Duchess of York and Logue didn’t happen like it did in the movie. “The film isn’t a documentary,” Logue says. “I don’t know that it detracts from anything. It was brilliant and rewarding.”

Lionel Logue was the king’s speech therapist and he protected his client’s privacy even after the monarch’s death, deferring to Queen Elizabeth’s wishes that the story of his stuttering not be told in her lifetime.

The king and Lionel Logue passed away decades ago, but the Logue family continued to abide by the Queen Mother’s wishes until she died in 2002 at age 101.

Mark Logue started reading his grandfather’s letters when he inherited them from his father in 2001, but he was busy running a successful production company and raising a family. “I promptly put it back in the box and forgot about it,” he recalls. 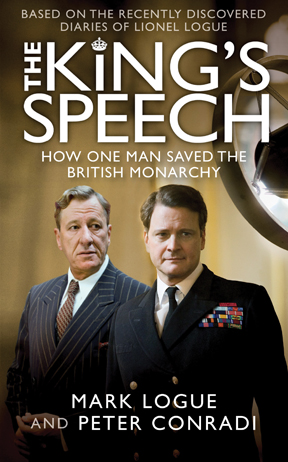 But in 2007, Logue started reading through his grandfather’s papers again with the idea of writing a biography. “It’s pretty difficult to go through it because it’s scrawny handwriting in pencil on fading paper,” Logue says.

Logue began work on the book in earnest after meeting Seidler and Hooper to discuss the movie in the summer of 2009. Iain Canning, one of the film’s producers, found Mark Logue through Australian speech therapist Caroline Bowen, who had published a paper about Lionel Logue in 2002.

But it was only in April 2010 that Logue found Conradi to help him write the book. The pressure became intense because the publisher needed the manuscript by July in order to have a book in print by the movie’s release in November.

Complicating matters, in late July a Logue cousin discovered a trove of new and insightful material. “Everything had to be rewritten,” Logue says. “We extended the deadline four weeks.”

Working from transcripts of the documents, Logue and Conradi communicated via the Internet to produce the 242-page account. “We wrote the book entirely by email correspondence,” says Logue, who logged more than 1,000 emails to Conradi. Logue took time off from work to meet the tight deadline. “He’d send me chapters as he wrote them.”

The book’s success has been a surprise, Logue acknowledges. “I never dreamed it would get the attention it was given,” he says. “I had no idea it would be as big as it got.”

The book has been republished in several different languages, including Hungarian, German and Russian. “It’s been published in two dialects of Chinese,” Logue says.

-From the Summer 2011 Newsletter