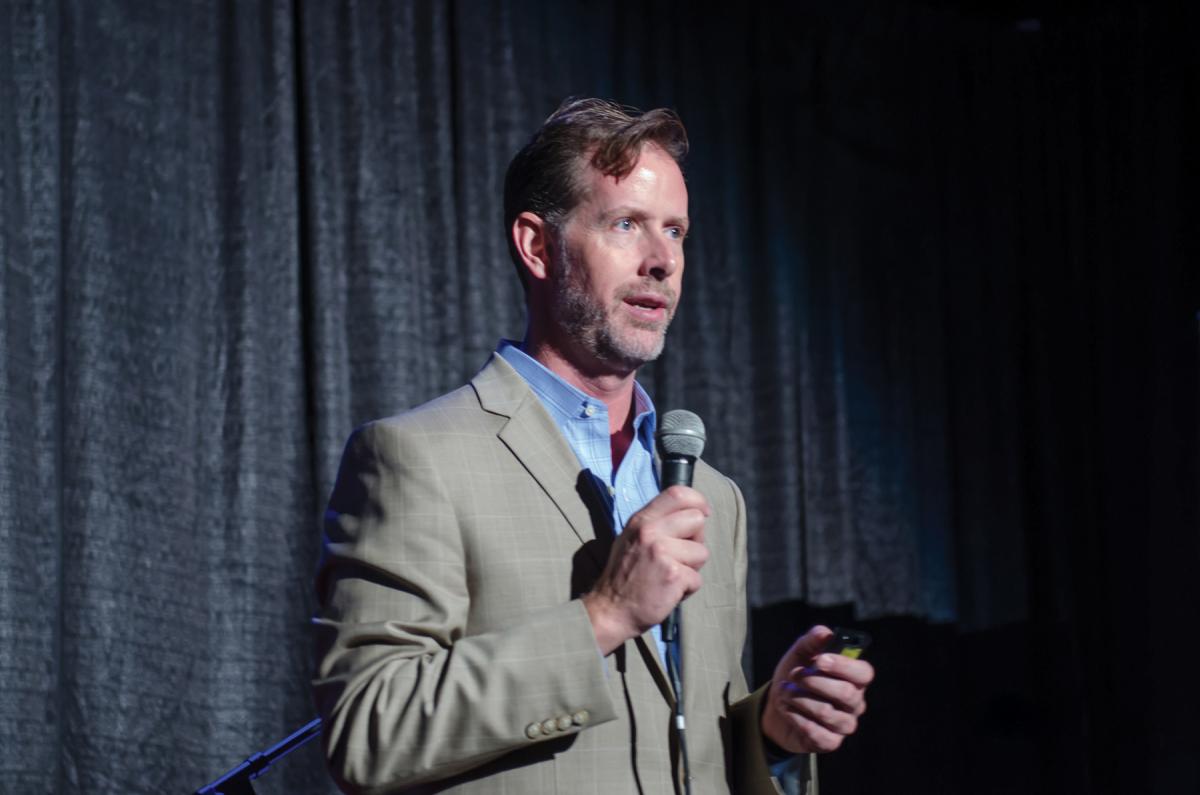 Meet John Moore – longtime corporate marketing executive at famous brand names like Whole Foods and Starbucks. Nobody is more competitive than John. He is driven to be the best. Nothing will stand in his way… not even his stuttering. John calls himself The Stuttering Presenter.
While most people, whether they stutter or not, cringe at the idea of speaking in public, John embraces it. He has given more than 250 presentations around the world, including Johannesburg, Cape Town, Barcelona, Amsterdam, Copenhagen, Banff, Quebec City, and Moscow. He’s also spoken throughout the U.S., including Chicago, New York City, Los Angeles, San Diego, Denver, Seattle, Dallas, Houston, Austin, Atlanta, Miami, and Philadelphia.

“At age two and a half, my parents knew that something wasn’t right with the way I spoke,” said John. “I had issues with consonants, so starting in kindergarten I was taken out of class for speech therapy. It was great to get help, but there was also the stigma of being different.” John also had a twin sister who didn’t stutter. “She was always positioned as smarter. She was placed in higher level classes, while I was put in lower levels.”
“One time, in high school, when I was taking a class my sister was in the year prior, since she was always a level ahead, I was given a C+ on the same exact paper that earned her an A+. That proved to me that the stigma was real.” But John never gave up.
By age 24, John had graduated from Baylor University with a degree  in Radio, TV, and Film. He had no job prospects. His parents were worried. He decided he wanted to face his “stuttering monster” once and for all. He didn’t want the stuttering monster to manage him; he wanted to manage it. He found a way to be more fluent, but it took five times the work to accomplish his goals. He decided instead to accept his stuttering and to work hard in his profession; harder than anyone else.
“For too many years, stuttering stifled my voice and stunted my growth. It wasn’t until I reached a very low point in my life that I decided stuttering wasn’t going to manage me. Instead, I was going to manage my stuttering. Meaning, I wasn’t going to allow the shame and guilt of stuttering to silence my voice. I was going to use every tool I had learned to minimize my disfluency and actively seek opportunities to speak, even if I stuttered. It was simple. For me to stop stuttering, I had to start talking,” said John.
He started a marketing job with Starbucks and moved on to Whole Foods. He voraciously read business books and was inspired to start consulting. He knew the key was to convey passion, despite his delivery. He wrote his own books on marketing, called “The Passion Conversation,” and started presenting and speaking in public.
“I adopted the approach that I’d ‘fake it till I make it,’” said John. “I pretended I had been doing it forever, and no one was any the wiser.”
When speaking in public, John says there are two things he does at the beginning of every presentation. “I tell the audience two things about myself. First is my mantra: I take my job seriously, and myself lightly. And second, I tell the audience that I stutter, and it will happen during this speech. It is very disarming, and helps me form a bond with them immediately. It also puts me at ease, so I don’t have to worry about disfluency.
“It’s important to know that despite all my appearances, I still get nervous. I need to get nervous to give a good performance. If I’m not nervous, I’m not trying hard enough,” said John.
At the end of some of his speeches, people come up to John and share their experiences with stuttering. “Once, a parent told me ‘Thank you, my child stutters.’ It made me tear up and I gave her a hug. I told her it may take 20, 30 years or longer for her child to find his passion and how to express himself fully, but she needed to give him that time and encouragement along the way.”
You can reach John at John@brandautopsy.com
From the 2016 Summer Newsletter