Noel Gallagher of Oasis Rocks On 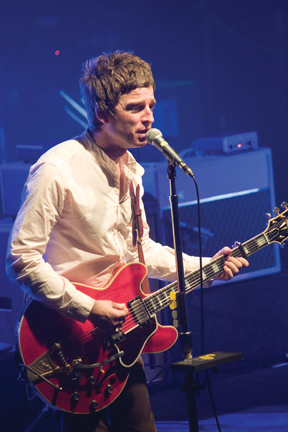 The British band Oasis is considered the biggest breakout band of the 1990s. Led by brothers Noel and Liam Gallagher of Manchester, Oasis’ 1994 debut album Definitely Maybe immediately set their star rising, while their second album (What’s the Story) Morning Glory topped the album charts in both the UK and U.S. as well as countless other countries. Two years later, their album Be Here Now would achieve the distinction of being the fastest-selling album in UK chart history. Several other highly successful albums followed in subsequent years. However, during the glory days of Oasis it was little-known that Noel Gallagher had overcome a stuttering problem through many years of speech therapy.
Born in Manchester in 1967 to Irish immigrant parents, Noel Gallagher’s talent fueled the success of Oasis. He was the band’s lead guitarist, and wrote almost every one of the band’s songs, including all of the numerous hits, such as “Supersonic,” “Some Might Say,” “Wonderwall” and “Don’t Look Back in Anger.” While brother Liam Gallagher was known as the band’s lead singer, Noel actually did perform lead vocals on a slew of songs. For instance, it is well-known that Noel wanted to sing lead on his song “Wonderwall” but Liam insisted on doing it; as compensation, Noel sang lead vocals on “Don’t Look Back in Anger,” which ended up topping the UK charts.  Other notable Oasis songs for which Noel provided lead vocals include “The Master Plan,” “Half the World Away” and “Talk Tonight.” The music world remembers the now famous acoustic performance in 1996 for MTV Unplugged in which Noel was forced to take over lead vocals on all the songs for the hour concert show due to Liam’s sore throat.
After an incredible run which included eight UK number one singles and eight UK number one albums in addition to countless chart-toppers worldwide, Noel left Oasis in 2009 due to artistic and personal differences with his younger brother Liam. Afterward, he has performed with a new band, Noel Gallagher’s High Flying Birds, for which he serves as lead vocalist, lead guitarist and songwriter.
Noel Gallagher has been open about many aspects of his early life, including his struggles with stuttering. Both Noel and his older brother Paul stuttered badly in their childhood, and were able to overcome the stuttering through many years of speech therapy. As has been cited in many articles in various UK newspapers over the years, Noel and Paul have stated that the physical abuse they received from their father as kids made the stuttering worse. The articles all generally report that the boys’ alcoholic father would hit them when they stuttered. The 2012 book Noel Gallagher: The Biography by Lucian Randall put forth, “Much would be written by others about the harshness of Gallagher’s upbringing – both he and Paul would develop stammers.”
A July 3, 2007, article about Gareth Gates in the daily tabloid The Sun titled “Idol Can Beat Stammer” invoked the triumph of Noel Gallagher as an example, “Noel Gallagher and his brother Paul went through years of speech therapy to get over their stammers.” Also, there are interviews on YouTube in which Noel discusses his past stuttering, such as a 2006 interview on the show Positivism on ITV.
Paul Gallagher, the Gallagher brother who was not in Oasis, published a memoir in 2006 titled Brothers from Childhood to Oasis: The Real Story. In the book Paul told about the childhood of the Gallagher brothers and the relationship of the three brothers all the way up through the fame of Oasis. Paul mentioned several times that he and younger brother Noel struggled with stuttering. He stated, “At play time I was always on my own, the other kids used to make fun of my stammer. I had a really bad one, and so did Noel. Our stammers were so pronounced that in the end our mam took us for speech therapy every week for four years to clear them up.”
From the Winter 2015 Newsletter