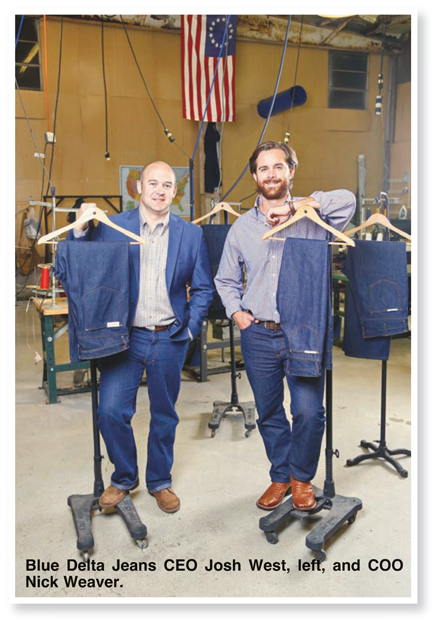 By Riley McBride Smith
Nick Weaver is a proud army brat born in Germany and raised primarily in the Mississippi Delta. He’s the COO of a custom made jean company called Blue Delta Jeans, an entrepreneur, an app developer, and a baseball fan. Nick Weaver is also one of 70 million people worldwide who stutter.
While Nick’s stutter could easily have been an excuse to hold him back professionally, Nick has an impressive confidence in his talents and a refreshing openness about his stutter. Recently, Nick gained recognition for appearing in a documentary about the company he co-founded, Blue Delta Jeans. In the documentary, Nick visibly stuttered in several scenes. Nick insisted on keeping the original takes of those segments to remain authentic and show the world that you can be confident, successful, and a person who stutters.
Blue Delta Jeans was started on a napkin over dinner by Nick and his high school pal, Josh West. They wanted to make jeans using only simple, raw, high quality materials, made in America. Their raw denim is processed into fabric right here in the United States, differentiating them from many of their competitors. For Nick, Blue Delta Jeans was also about embracing his southern roots and putting a spin on the traditional Weaver work, “Four generations of my family have all hand picked cotton. I’m the first one not to hand pick cotton in my family. With Blue Delta Jeans I’m still in a way sticking to tradition and returning to cotton to make my living.”
The duo takes pride in their return to traditional high quality products. Whether it’s using an old fashioned button contraption, traditional sewing machines, or custom fitting every jean to each individual, Blue Delta Jeans guarantees they will use the best quality materials and make the perfect fit.  Finding the perfect fit has not only become a company mantra but also has been a bit of a metaphor for Nick’s life.
As his mother recalls, Nick stuttered from his first word. Nick’s mother and father were both determined to never let Nick’s speech impediment hold him back or make him feel different or less confident than other children. They kept Nick involved in activities and encouraged him to explore all his talents including his aptitude for baseball.  It may sound hard to believe, but for Nick, his stutter actually has become a source of his confidence. Overcoming stuttering has given him more confidence in who he is – much more than most might expect. Nick chose to see his stutter as a gift, not a burden.
“Through years of sports, I learned how hard work yields rewards. Everything worked out the way it was supposed to. Despite my youthful insecurities with my speech impediment, I never let stuttering define me. It helped me find myself and express myself in ways that could help me grow stronger. I now think of my stuttering as a blessing.”
Nick’s next journey will be helping other people who stutter find a way to overcome stuttering, as he has done. Nick is incredibly proud of his Blue Delta Jeans Company but believes his greatest accomplishment will come next year when his anti-stuttering app will be available on iTunes.
Nick has taken a highly effective anti-stuttering technique that has worked wonders for his own stuttering and developed an app to help people who stutter regain confidence so they can express themselves, explore their talents, and never feel held back by their disability.
“People should remember you for your success and not your stutter,” he added.
FAST FACTS:
• Founded in 2010
• Based in Verona, Miss.
• BlueDeltaJeans.com
• 888-963-7879
• Facebook
• Twitter
From the Fall 2014 Newsletter