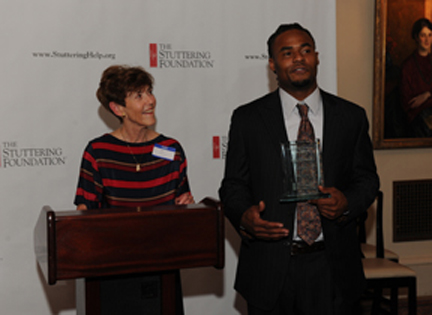 New York (May 8, 2012) —  NFL Cornerback Ellis Lankster, of the New York Jets, was honored by the Stuttering Foundation at a May 8th gala in New York to celebrate National Stuttering Awareness Week and the Foundation’s 65th Anniversary as the world’s leading charitable organization helping those who stutter.

“Ellis shows his true toughness by sharing his struggles with fluency as a child,” said Jane Fraser, president of the Stuttering Foundation. “He refused to let his stutter keep him from his dream of playing professional football, and he is committed to helping and inspiring children attain their dreams by overcoming the obstacles they face.”

Fraser presented Lankster with the Foundation’s “Converting Awareness into Action” Award for the hope and inspiration he brings to the stuttering community.