"When I put some melody and rhythm behind my voice, the stutter lost all its power" 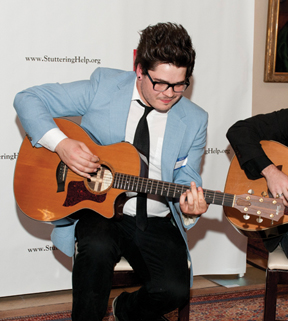 I played my first show because there was this girl I wanted to impress. At the time, the alternative-rock of the 90's was starting to give way to the the pop-punk of the early 00's - so we were listening to everything from Matchbox Twenty to All-American Rejects to Blink 182. Nobody else in the band wanted to sing, so I had to figure it out.

The funny thing was, nobody expected me to pull it off because up until then, I'd struggled with a strong stutter: I didn't participate in class discussions when I had good ideas; I was more afraid to talk to girls than any 15-year-old guy should be. "What if I get stuck and can't say anything?" I'd ask myself. Opening my mouth in front of a microphone was the last thing I wanted to do.

This is well-documented now, but I discovered it on my own: When I put some melody and rhythm behind my voice, the stutter lost all its power. I could sing like a bird! I knew that I'd found a way to express myself, a way to open up. I started writing songs and playing as often as I could!

Fast forward a few years, and I'd finished a year of university and started my own band Hello Kelly. As far as the indie scene in Ontario was concerned, we were pretty good! People would come to see us, some of them would sing along. I didn't talk much about my stuttering for the first few years, but towards the end of the band's run I decided that I wanted to try exposing it.

I wrote a song called "The Communication Breakdown" and our drummer, Ben Mahaffey, would come out from behind the drums, talk about my story, and introduce the song. People started coming up to me after shows. Not just people who stuttered, but other people too - people who felt like they "didn't have a voice." People said I was inspirational!

But I can't end this story there. See, our angle was: "Here's a guy who can't speak, so he expresses himself through music." There's a guy on American Idol right now who's being portrayed as having that same story. But can the guy really not speak? Of course not, the show's just marketing it that way. Poor Keith Urban was just trying to be nice when he said, "You should sing all the time!" after Lazaro's audition. He didn't realize that Lazaro - like me - has probably heard that suggestion his whole life. Every time somebody said that to me, I wanted to ask, "Aren't you willing to wait for me to speak?"

I began to wonder if I was hiding. After all, I wasn't telling my story on stage at all those shows. I was asking my drummer to tell my story. Even though he did a really good job, I started to wonder if maybe the more inspiring version of my story wasn't a singer who can't speak, but a stutterer … who chooses to.

I'd been to speech therapy a few times as a kid but nothing really stuck. Looking back now, I didn't realize how crucial it was to work at transferring the skills I'd learned in the clinic out into the real world. Now that I'm older and I understand how effective treatment can be, I've returned to therapy and started seizing more control over my stutter than I've ever had. It's like a light's been turned on in a dark cave. Is it hard work? Yes. I'm not out of the cave yet, but I now know which direction to go.

Really, my story's just beginning. I'm looking at a new future in the way I speak and a new future in music too. And hey, not everybody with a stutter wants to change the way they speak in a drastic way - and that's OK. But I'm excited about where it's taking me. It's always going to be easier for me to sing, and I'm so thankful that I have that place where thoughts and ideas flow effortlessly. But I'm going to keep speaking too. Because I've got a voice and things to say.

And so do you.

Francy is a singer/songwriter/screenwriter transplanted from Toronto, ON, into Nashville, TN. He'll be releasing new music soon at hellokellyonline.com.

Your voice inspires, your melody transcends!

Thats so true. If anyone watches the American Idol, there is a young guy on there that has a very intense stutter. When he sings, and he can sing, you would never guess he has a stutter. Has anyone seen this?

Thank you for your story. I have a 5 yr old son who stutters. We've done a year and a half of therapy so far. I realized recently that lots of people were not waiting for him to speak. It breaks my heart when others give up on waiting and move on to another subject. I hope I can find ways to help him overcome this.

Wow! That's a very nice story Francy! I love music, listening to it makes me feel good, and I can't go on a day without it. I just hope that like you, the youth will be involve in music too or any recreational activities in the community.

You're a role model. Keep it up!

Hi my name is jesus and am 11 years old and I stutter. When I started stuttering I thought that I will not do the things I love the most, talking with people, singing and more. kids were copying me, they teas me, it was so bad and I wanted to cry. But when I worked with my speech teacher I felt more better. When I got to beall elemetery school all of the kids were defending me from telling me things. One day when I got to my class I told my teach that if I can go and ask the principal if I can sing in the morning she said "yes" when I went and did the song and told the principal it was all ready the next day I went and sang when I was singing I stuttered I was saying in my mined 'this is the end of my good live' when I finished I was so nerves that they will laugh at me, they did not they were claping at me and the teacher said 'good job'. that they I became a singer for the school and even other schools were asking for me. So I will tell you all never give up.

While Bill Withers has long been on the Stuttering Foundation's list of Famous People Who Stutter, many people probably didn’t realize he stuttered.