What I Want to Say vs What I Can Say 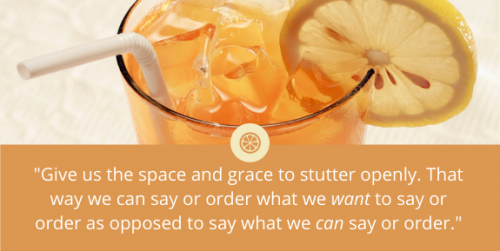 “Hi! Welcome to your favorite restaurant. What can I get for you today?”

For most people, this basic conversation is nothing to write an article about. They order what they want, pay for their food, and continue on with their day. Yet for people who stutter (PWS), what we want to order might be different than what we can order. Let me explain.

I’m a huge fan of unsweet tea with lemon, and I order that as my drink for nearly every meal. Whenever I order unsweet tea, more times than not, I will block on the “un” in unsweet tea. If I’m with my parents or sister, I will wait for them to order an unsweet tea for themselves and then say, “Same,” when the waiter asks for my drink order. If I’m by myself or with friends I tend to stutter mightily on “unsweet tea” and then repeat it numerous times to make sure the waiter heard me correctly. I know I’ll have my southern card revoked for this, but few things are worse than ordering an unsweet tea and getting sweet tea. I could order something easier for me to say, such as water or lemonade but I’d rather drink tea over the other options.

The same issue arises sometimes when I customize an order. There are times when I’ll get my burger without cheese instead of with cheese because I knew I was going to stutter on “add cheese please” and just didn’t want to deal with stuttering in that moment.

But it’s not just ordering in a restaurant. It’s answering a question in class or participating in a discussion. Or approaching that cute person at the bar and asking them for their number. It’s jumping in and joining a group conversation with others. It's deciding whether or not to say “hi” to someone in the hallway at work. It’s whether you say “James” or “Ben” when the barista asks you for your name. It’s so many things that someone who doesn’t stutter might not even consider.

During my college career, there were many times when I didn’t participate in class discussions or answer my professors’ questions. I sat out of discussions not because I had nothing to contribute--rather, I knew I would stutter and didn’t want to deal with stuttering. I didn’t answer questions because I didn’t want all eyes on me while I stuttered on the correct answer. Back then, being a person who was silent was better than being a person who stutters. Although I no longer believe that to be my best approach, there are still times when I live that motto. There have been numerous times where I didn’t approach that cute girl because I was afraid that I might stutter during my introduction and she might say something dumb in response. In those moments, the fear of how I can say it wins out over what I want to say.

Even when I’m talking to friends, family, and co-workers, I might not jump in and make the dumb joke or add my two cents to the topic. I do this because I know that by the time I say what I want to say, the conversation will be on a different topic and my joke or commentary will no longer be relevant. These are people who know I stutter and don’t care that I stutter, yet knowing I can’t say what I want to say in a timely manner prevents me from joining the conversation.

I can’t even tell you how many times I didn’t say hello to someone in a hallway at work over the past few years. I did this not to be rude, but rather because I could feel I was going to stutter on the word and knew by the time I got it out the person would be long gone. I know this because I tend to stutter the most on words that start with the letter “H”. I used to hate this part of my stutter, but now I find it somewhat ironic.

So, how can saying what I want to say and saying what I can say be the same thing? For me, it’s to jump into those conversations more often. It’s to not let the fear of a few seconds of stuttering hold me back from getting a few groans from a joke. At times, it’s living what I talk about in my presentations: to forgive myself for the times when I don’t live what I preach and when I sit out conversation because of stuttering. For others, it’s to know what stuttering looks like and sounds like. It’s to know how to properly respond to a stuttering moment. It’s making sure that your PWS knows that stuttering is welcomed into every conversation.

Note: This article was inspired by a conversation with my friend Erik X. Raj, Ph.D., CCC-SLP from Monmouth University.