Stuttering in the Media

We’re almost a quarter of the way into 2016 and the spotlight on stuttering has shone brightly. Here is a recap of some of the events over the past few months which have got us talking. 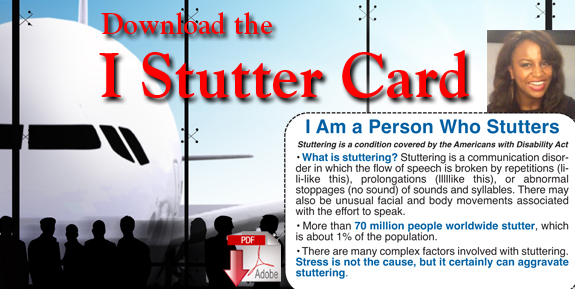 1. Woman Detained in Atlanta Airport Because of Stuttering

In January, airport officials detained and questioned Kylah Simmons about her stutter and accused her of lying when she explained that she stuttered (the agents who interviewed her did not understand that people who stutter have varying levels of fluency). Ms Simmons wrote about her the intimidating experience on Huffington Post and she also spoke about the experience on StutterTalk. The Stuttering Foundation responded by co-designing an ID card with Ms Simmons to educate those who are not familiar with stuttering. Bravo to Ms Simmons for speaking out and sharing her story with us, bravo to StutterTalk for covering the story so swiftly, and bravo to the Stuttering Foundation of America for taking action and developing a resource people can elect to use in stressful situations.

If you haven’t seen Benjamin Cleary’s Oscar winning short film ‘Stutterer’, I would highly recommend purchasing it from iTunes and viewing it for its insightful portrayal of how stuttering can affect one’s life. Cleary’s 12-minute film has plenty of subtleties and nuances that make it worth watching at least twice. I have to admit that there was a deeper appreciation with the second viewing of the film. It’s been interesting to discuss the intricacies of ‘Stutterer’ with fellow speech language pathologists as well as friends in the stuttering community. ‘Stutterer’ film was made on a shoestring budget of around 5000 pounds, an amazing achievement for an Oscar winning film. For more insights into Benjamin Cleary’s portrayal of stuttering check out his interview. 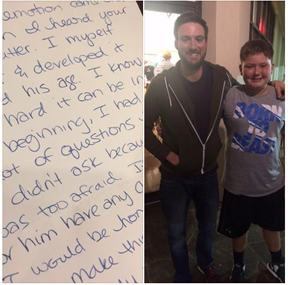 3. Waiter Shows 11 Year Old Boy Who Stutters He is Not Alone

This feel good story makes me appreciate the power of social media. At the beginning of the month the Love What Matters Facebook page shared a post which went viral. A waiter at a Stone Werks restaurant reached out to an 11-year-old boy who stutters by writing him a note and offering words of support and encouragement.

"Sudden emotion came over me when I heard your son stutter. I myself stutter and developed it around his age. I know how hard it can be in the beginning. I had a lot of questions that I didn't ask because I was too afraid. If you or he has any questions, I would be honored to help make this process easier."

The world is certainly a better place when one person reaches out to another with kindness.

I hope this post shows you that there is an online community which supports each other when things don’t go according to plan, that there are times to celebrate with one another and that random acts of kindness can mean the world to an 11-year-old and his family. Stay well and until next time!