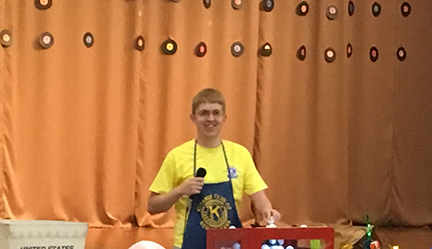 On the night of August 31, I called four games of bingo. That was not something I had on my list of things to do that day nor was it on the list of things I thought I would ever do. I am a member of the Kiwanis Club of New Orleans and that night we hosted a bingo night for a group of special needs adults. I say this not to brag, but rather to set the stage for this event.

Soon after I got to the event, one of my fellow members jokingly said, “You’re calling the games.” My initial response was, “Ok,” and I went to go help with something else. Internally, I thought, “I hope he’s joking. If not, well crap. I’ll do it, but I don’t know how well this will go over.” I say that because this group is very serious about their bingo and I didn’t know how well they would respond to the fact that I stutter. As we were getting everything ready, I went to the person who I thought was calling the games and asked her if she was calling them or if I am. We eventually decided that she would begin calling them and then we would switch off after the snack break and I would call one game. I agreed because this was a unique opportunity for me to get further out of my comfort zone and grow even more in my acceptance of stuttering.

The first half went well, and everyone was having a good time. During the first half, I wasn’t thinking too much about what could possibly go wrong. I was more focused on making sure our group was having a good time and marking all the spaces on their bingo cards. We then took our snack break and it was my turn to be the caller. I went up expecting to call one game and stutter on nearly every number because all the essential ingredients were there for me to stutter big time: a microphone, the unknown of which numbers will appear and when, the fact that there are no alternative ways to say “B12” or “N36” and that I needed to speak before we could move on to the next thing. I called the first number and it was surprisingly fluent. I called the next number to the same result. Then the third number was called to the same result. What was supposed to be one game turned into four games. After the first few numbers were called, I got more comfortable behind the mic and started to make jokes and puns when the opportunity presented itself.

Yes, I did stutter a few times during my time as caller, but they were mild, and the untrained ear most likely didn’t notice them. What’s far more important is the fact that I did it. The James from five or six years ago would have never in a million years agreed to call a game of bingo. The James from three years ago would’ve screamed out the numbers instead of using the microphone because he did not want the intimate details of his stutter to be broadcasted for all to hear. Tonight, I celebrated this small victory and allowed myself to reflect on just how far I’ve come so far on this journey with stuttering.